Was going to post something really entertaining, amusing and thought-provoking about Tango yesterday (as if!) when we were tragically interrupted by the power outage spawned by the Mother of all Toronto Storms.

Highways turned into lakes!  The lights went out!  People were trapped in trains, cars and trees! Sexy young women in short shorts posed in knee-deep water and wet t-shirts! 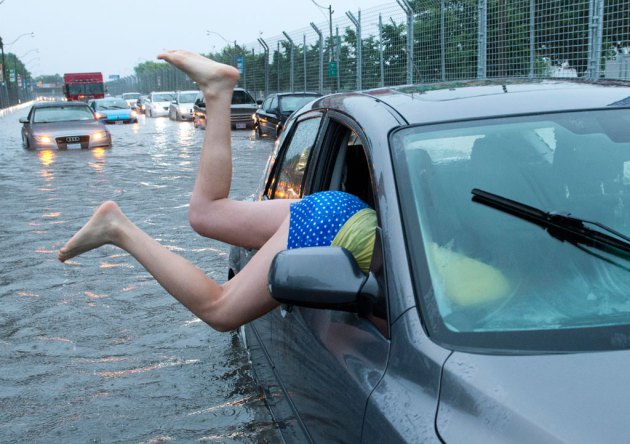 We know we have made you all excited now...sorry, you only get to see a photo of her legs

We were lucky, we only lost power for four hours, and we had a propane gas burner so we were able to cook a pot of shrimp noodles and didn't have to resort to cannibalism or kitty-cat tartare.*

Since power was out for most of Toronto, we wondered, were the Tango events that were being held on Monday cancelled?  Were people bummed?  Did any intrepid dancer even show up?  The last time the bottom of the Don Valley Parkway got flooded so badly that cars were washed into the Don River (ohhhh, just a few years ago), we went to Tango anyway - and the Practica was open!

We also wondered (while sitting on the sofa bored and not watching TV for once), who enjoys dancing Tango the most?  It seems to us that once people in Toronto Tango think they are good at Tango, they think about teaching or organizing or DJ-ing or competing or being "like a Milonguero" (whatever that means) and that makes them carry the big burden of being "expert" or "professional" (even though they might not be, they just think they are) and they don't look like they are enjoying dancing Tango anymore.

"Sometimes it looks like that the dancers who look like they enjoy dancing Tango the most are the ones who don't dance all that well," said Man Yung. "Maybe it's because they aren't chained up and weighed down by their own expectations."

Another thing we wondered was: How would we run our own milonga if we had like, millions of dollars?

"First of all, I will rent the venue with the best, silkiest dance floor and with air-conditioning," Man Yung said.

"I'd pay someone to take the entradas and organize refreshments. I would even hire a host so that they can go and greet people and be friendly and sociable and stuff so that I can concentrate on playing match-three games on my phone - whoops, I mean, 'Dancing with Man Yung', " I said. "And even though I will arrange my own music, I'll hire someone to monitor the volume and adjust the quality of the sound all night.  I hate it when DJs run off to dance or socialize and then the music volume sudden explodes in your ears - sound quality is just as important as sound selection, in my books."

"I hate the sound explosion - and I hate it too when the music gets so low you can't hear it!  You can't just leave your music like that.  On another note, when I promote the milonga, I will emphasize that it is a Strictly Traditional Milonga, so that people will not show up expecting to have the freedom to kick people in the shins with their Show Tango/Nuevo Tango moves.  If I don't care about money, I wouldn't care about excluding inconsiderate dancers from my milonga!"

"Hee!  I remember that.  Nice example to give to all those people who thought they were somewhere that promoted social dancing.  I saw that lots of real 'Traditional' dancers avoided the milonga until the Cutting Edge Tango Circus left town!" Man Yung said.  "So, what would you do to keep things calm and orderly on the dance floor?"

"Isn't that overkill?  Wouldn't it be better if you asked people politely who were kicking too wildly to tone it down?"

I shook my head.  "You have to give your dancers confidence that everyone will behave.  People will feel totally safe when they see that we have like, half-a-dozen Police Officers with GUNS protecting the floor."

Anyone want to come to our milonga?  We will have macarons - and Police!

I would love to come to your milonga.I think Tango Police for removing the clowns is a good idea. If you want to see a real Ringling Bros three ring circus come to LA. I’ve often thought of putting huge dunce hats on those that don’t dance social tango but couldn’t find a supplier of dunce hats that could ship large enough quantities. By the way I no longer use the phrase “traditional tango” it’s either “social tango” or not social tango.

So sorry to hear that your local tango scene is hosting a circus. Wait a moment, we're sorry too that our local scene is also hosting a circus! Watch out about those pointy dunce hats though - you don't know what the carnie-folk may come up with, maybe some kind of twisty head volcada/colgada thing, and we're sure someone will get impaled in the throat!

Thanks for your comment and for wanting to come to our milonga!