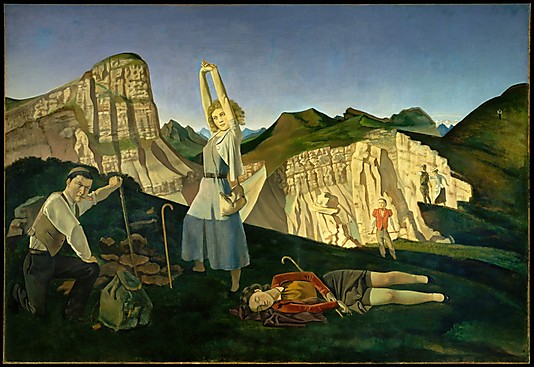 I chose to use this famous painting of "The Mountain" by Balthus as an illustration for this post because I like it and not for any particular or other reason.  Or maybe... ok, imagine what it would look like if the whole Balthus mountain landscape was bathed in fog.  Pretty scary, huh?  Or perhaps it was scarier without the fog?  You decide!
Back when Man Yung was young and energetic, many many many many (did I say many?) years ago, he liked to go on hiking trips with his friends on the mountain trails of Hong Kong.*


* For such a small place, Hong Kong is surprisingly hilly/mountainous.
Once, during one of their hiking excursions, a thick, dense (creepy? alienesque?) fog descended all over the mountain.  The hikers could hardly see more than two steps ahead of them.

No-one panicked.  They continued slowly and cautiously on their way, stepping carefully on the visible tracks of the trail.  They were making their way off the mountain when they encountered a group of Boy Scouts.

The Boy Scouts were decked out in their shiny, neat uniforms and were extremely organized and regimental.  No doubt they were prepared for puny little contingencies like a tiny dab of fog!  They were adamant about being quite helpful too.  They sent their leader to talk to Man Yung to see if he and his hikers needed their "assistance".

"Looks like you are in a spot of trouble here," said Scout Leader to Man Yung.  Scout Leader may or may not have stood with his hands on his hips and legs wide apart, superhero-style [I wasn't there, I'm just guessing].  "We can help you poor lost folk make it back to civilization - as you can see (he pointed proudly at his uniform) we are experts at survival skills and wilderness navigation."

Man Yung replied, "Thank you very much - we'll be perfectly all right.  We have a compass and we know the way."

Scout Leader cocked his eyebrow and looked at Man Yung.  "You may have a compass - but do you have a [TA-DAAAA! he presented with a flourish] MAP?  Because WE have a map."

Man Yung cocked his eyebrow and looked at Scout Leader.  "You may have a MAP - but do you have a compass?"

"What would we need a compass for?  Our map is very detailed and precise and it's all that we need," sniffed Scout Leader.

"OK, you can try using your map when you can't even see your hand in front of your face for the fog.  At least with a compass we know which direction we are going in.  Hong Kong isn't so big - so long we are going in the right direction, we will end up in Chuen Wan in half an hour!"**


** Yes, Hong Kong is that small.
Whilst Man Yung and his group of hikers were able to make it off the mountain safe and sound in time for dinner with the use of their compass - the Scouts persisted stubbornly with their map.  Alas, the map was rendered useless as the Scouts could not see any of the landmarks around them and furthermore didn't know which direction they were facing due to the fog.  They eventually got lost and were were devoured mercilessly by a flock of ravenous, Scout-eating squirrels.

2.  Ha ha - I doubt you will be able to find it with a map - or even a GPS (and remember, you have to keep on paying for map updates with GPS).  Maybe you will get it eventually...but you will have to be going in the right direction.  Unfortunately, the ten-tiered, densely structured, meticulously planned, academically accredited, dance-school affiliated, 100 hour Tango course you are taking will only teach you how to dance around and around yourself in circles with a lot of skill.  Whether you will finally reach your destination - Tango - is doubtful.  I wish you the best of luck - and watch out for the carnivorous squirrels.
Posted by Irene and Man Yung at 11:30 PM