Tango without Liberty is a Tragedy

When I announced the title to our latest post, Man Yung gave me a strange look.

"If you write that, the reckless big movement crowd will have a field day.  Aren't they always constantly seeking an excuse to unleash their 'artistic freedom' on the dance floor- with a little bit of 'liberty to kick you in the shins' on the side?"

"Therein lies the 'Tragedy'," I replied.  "Isn't it a shame that they have to try and draw attention to themselves by barging around in a crowded milonga instead of having their own private stage and a paying audience?"

Joking aside, I am talking about a different kind of liberty. 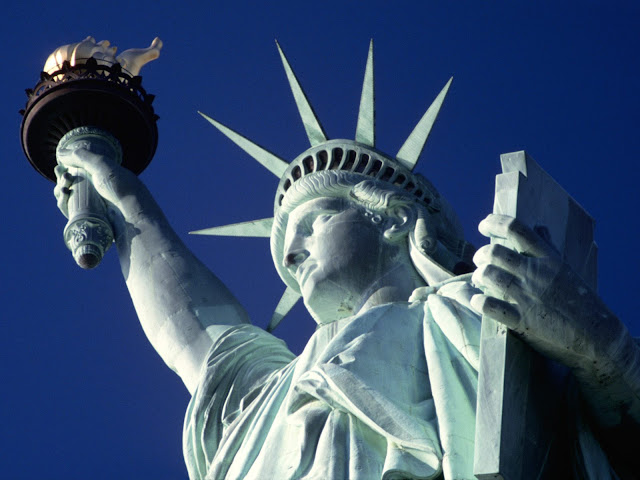 Even Lady Liberty wouldn't be able to turn down a dance... if she was teaching a workshop at your local milonga
We were at one of the more popular tourist milongas in Buenos Aires.  Seated at the next table were a group of "venerable old masters" - among them a legendary tanguera.

Late in the evening, we saw a young tanguero (of the flappy pants, shaggy hairdo and the untucked shirt variety) approach her table.  He engaged her in conversation (probably flattering her and telling her how much he enjoyed her performance that night) and asked for her business card.

Then, nonchalantly, HE ASKED HER TO DANCE.

To our surprise, SHE ACCEPTED AND GOT UP. But not eagerly.

Now, we knew the Legend didn't just dance with anybody.  We've only seen her dance with her partner.  And she is usually so stern and forbidding, no-one would dare approach her.

We stared in disbelief as the Flappy Tanguero thrashed and flailed about on the dance floor in the most ostentatious way possible, with the tiny ancient Legend hanging on.  Now he had her as his prize, by god he was going to show off to anyone who cared to look!  Of course she could hold her own - she had danced with the greats, and there are Youtube videos to prove it.  But to have to let herself be thrown about by this joker?

When she got back to the table, we could tell she was displeased.  "No one in my day would ever consider that man a dancer!" we overheard her say.

Yes - but I think he organizes a milonga somewhere.

In Toronto, we have a whole slew of ladies and gents who will stop at nothing in order to get a "dance in" with a desirable Pro.  You will find them hovering menacingly near tables chock-full of visiting Tango Pros at special events and tango festivals.  If "friendly conversation" or the cabeceo won't work, they will ask.  They will plead.  They will shamelessly ambush any Pro who tries to break away for the washroom.  I have even seen some spunky lady march right over to an unsuspecting, seated, visiting Pro, grab him by the arm and start dragging him - protesting helplessly - onto the dance floor.

Now, you would think that the deep sense of dance card entitlement may have arisen in the said individuals from them having organized the visiting Pro's event, or from taking private classes, or even taking the pre-milonga workshop - but that may not always be the case.  Some of these "Tango Dance Stalkers" may not have taken classes or workshops with, or even applauded the performance of the visiting Pro!

For the Tango Professional who cares about the bottom line, the unfortunate fact is this: dancing with people you don't want to dance with is not just reality, it is expected of you. Your professionalism compromises you.  You are required  be "nice" and give up a little, especially to people who could "help" you, or could give you business - no matter how much you don't want to, no matter how objectified it makes you feel.  Because if you don't, some people will resent you - even sully your reputation.  You might not be invited in, out, up, back and around - wherever the money is.  Even Toronto's own personal Fabio, (yes, the one with the fancy falutin' moves who dresses like a garbage dump) in an unguarded moment, confessed (shuddering):  "I can't stand how I have to pretend to enjoy dancing with these women who gross me out!"

All sorts of coping mechanisms pop up.  Some visiting Pros avoid attending milongas.  Another visiting Pro we saw went to the milonga - but refused to change into his dancing shoes.  One very famous one got into fisticuffs with his over-zealous admirer.

With the coercion and "ick" factor so high, it seems inevitable that many Pros - especially the top ones, lusted after all over the universe - will start to compartmentalize their dancing.  Don't even think about entrega or that they are going to dancing with the whole of their beings - but there's certainly an entertaining part, a charming part, a teaching part, a seductive part, a playful part - whatever flavour you like, so long it isn't the real part.  Some Pros become so "pro" they could even turn their "dance magic" on and off like a faucet, depending on the situation - something that fellow tango blogger Bora has described in her observations of some of the pros she encountered.  We've heard of some turning to drugs - they look like they are dancing with you, grinning and having a mighty fine time - but in fact, there's nothing in those eyes and behind that tight smile, they are miles away....

It's enough to make me thank the heavens that I have no need or compulsion or ambition to become anything even remotely resembling a Tango Pro.  I enjoy having the freedom to choose when I dance, and with whom.  I have the discretion to say no to dances I know I won't throw my whole being into - whether it's because of the blah music, or the yucky partner, or just feeling like I don't want to. When I dance, I dance unshackled - in the embrace of tango, my body is free, my heart is free, my soul is free. You don't have that kind of liberty at your job, with your friends, or with your family.

Tango is my escape, as it must be for many others who enjoy and embrace its magic.  But to end up trying to 'escape' from the thing that gave you your 'escape'?  That, my friend, is tragic.

How can we stop this Tragedy?

Can Tango Dance Stalkers be convinced to stop their stalking and be more considerate - and to go no further than the cabeceo when it comes to attempting to get a dance with a Tango Pro?

Can the Tango Pros really say no whenever and wherever they want?

Not if fame and fortune is their top concern.

I wish I could have given the Legend a hug.  And tell her not to mind so much, and to say no if she wants to.  She is free - if she wants to be.  Perhaps that's the only way you could strike a balance - when Tango has become a job and an obligation.
Posted by Irene and Man Yung at 11:52 PM

Cabaceo is the only answer... nobody should feel pressurized into dancing with anyone, be it a professional or a social dancer. I don't understand why so many people fail to appreciate the usefulness of it.

Shortly after this post, we attended a local milonga - and during the announcements the organizer told everyone to try to use the cabeceo, because the previous week, the guest instructor was literally mobbed by hungry, rabid, salivating followers looking for a dance. Maybe that's why he always beats a hasty exit an hour into every milonga he attends.