Since we are talking about unusual sights, how about this: two middle-aged, not terribly attractive or skinny Chinese people from Toronto performing at Salon Canning!  and NOT dancing in a "Robotic Championship-style Salon Tango Style"!  Without costumes!  Without choreography!  Without anyone being shot out of a cannon!  AND THEY AREN'T EVEN TANGO TEACHERS/TANGO PROFESSIONALS.  And there was applause (a great deal of it, not just polite clapping at the end)?  Unbelievable!

Toronto Tango is still shocked and perplexed and scratching their heads - and yet, the Porteños thought it was quite normal (and maybe even liked it)!

Here are some other sights that may be considered normal in Buenos Aires - but bizarre anywhere else: 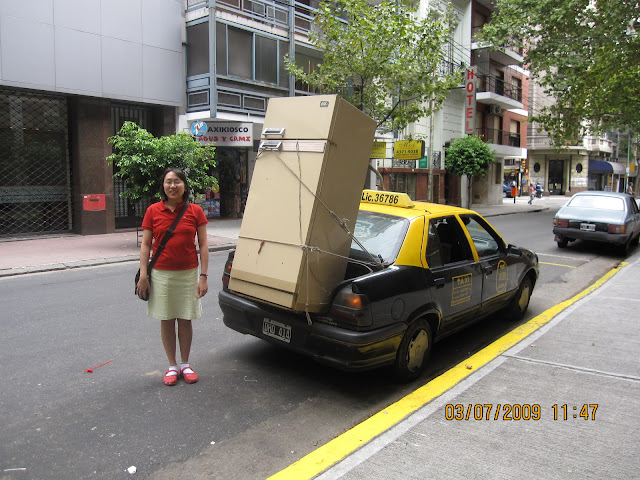 We stopped in awe an admiration and exclaimed to the Taxi driver: "What a work of art!"  He smiled quite proudly and agreed. (We asked his permission before taking the photo!  Didn't want to get him into trouble!) 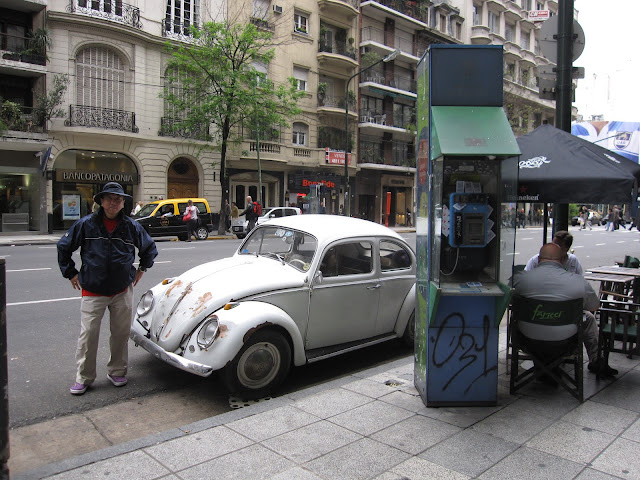 Some cars that you can find on Buenos Aires roads are really vintage.  You won't be able to find this model of car in this kind of shape - and still running! in Toronto.  In fact, some modes of transportation are so vintage they run on hay and grass.... 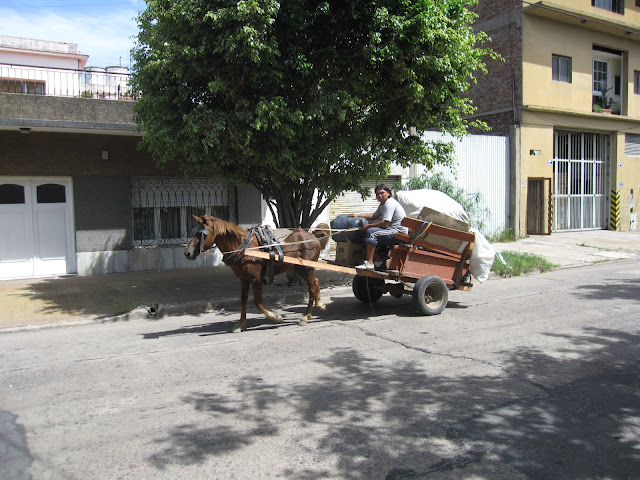 Up to two years ago, you could still hear the horse's hooves clopping away as the horse carts passed by Osvaldo and Coca's house in Gerlí at least once every hour.  Lately, however, we haven't encountered any. 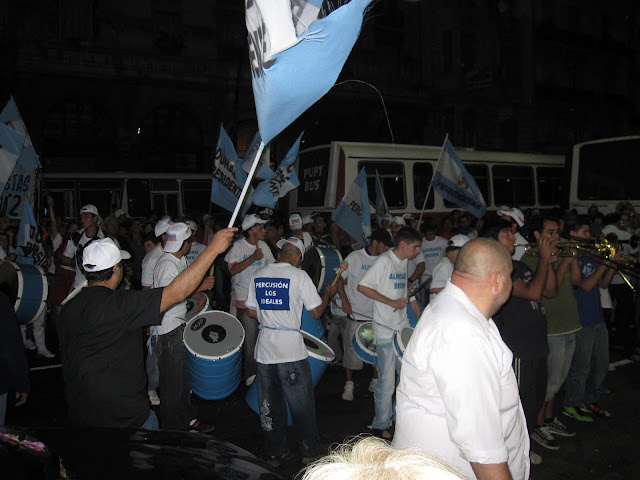 Noisy political rallies and protests are everywhere.  If you see a whole bunch of schoolbuses drive up to an intersection - before you know it the whole street will be blocked and traffic diverted for miles.  This was in October 2011 just before the presidential election.  Here's a video of the event so you can see and hear how noisy it was: 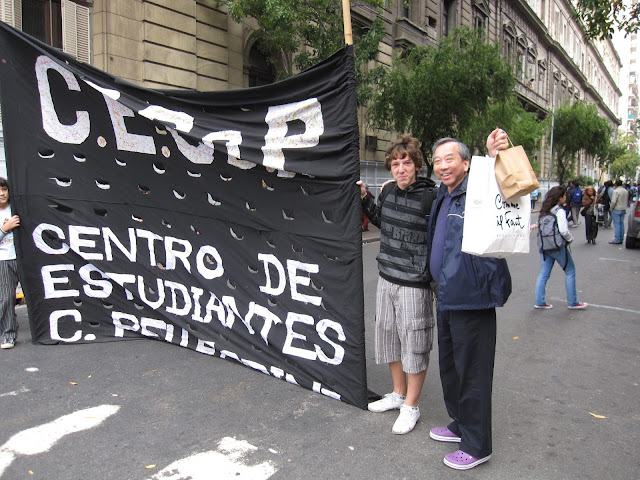 There's another protest blocking the highway to the airport!  Yet another blocking the 9 de Julio!  And another outside of Congreso! It has become so common it is no longer news.  Whenever we jump into a cab we ask the driver two questions: "Are there any road blocks today?" and "How's traffic?"  The inevitable answers are "Yes" and "Loca!" (Crazy!)*

* This year we encountered more examples than ever of protests in the street - but this time Man Yung didn't want to get close or take photos because he sensed that the mood of these protests were more angry and volatile than they were previously - and it would be foolish to get caught in the middle of a dangerous and angry crowd. 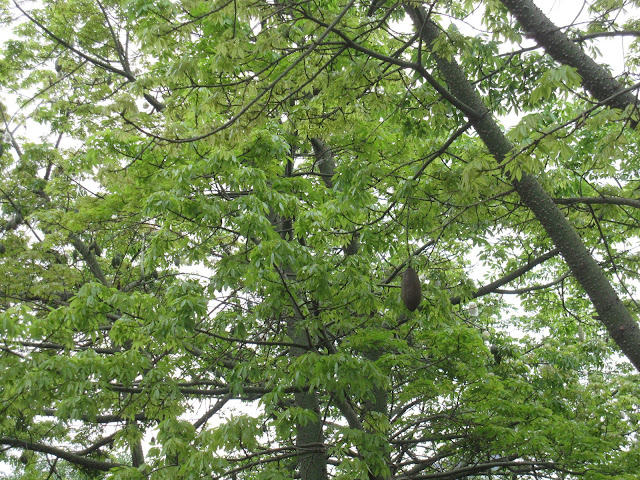 We saw lots of these "Papayas" hanging from the trees.  We asked the Taxi driver: "Can we eat them?  At least can we make soup?"  The Taxi Driver laughed at us and replied:  "If they were edible, there would be none left!"  In fact they aren't papayas or some melons, they are some kind of cotton seed pods (not at all tasty). 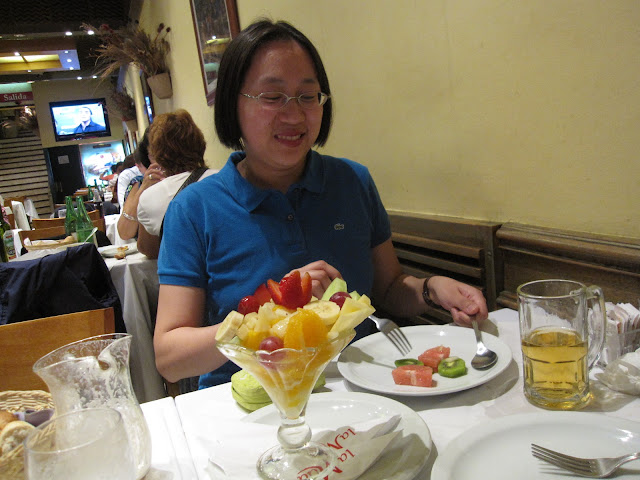 On a related note, this delectable-looking fruit salad was in fact, EXTREMELY SOUR.  It is quite normal for Porteños to add like, ten packets of sugar or a gallon of orange juice to their fruit salads to make them more palatable. 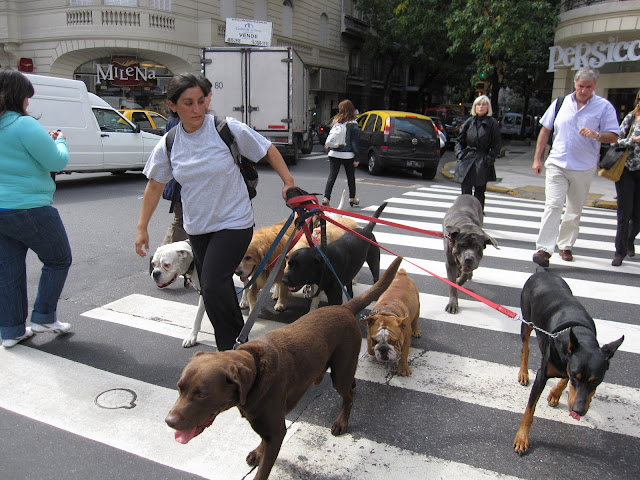 A very common sight you are not likely to find anywhere else: dog walkers all over the block.  And not "just" dog walkers - they're dog walkers with supernatural powers leading like, massive herds of at least ten to twenty dogs (or that's what it looked like to us).  And all the doggies are always so good and well-behaved! 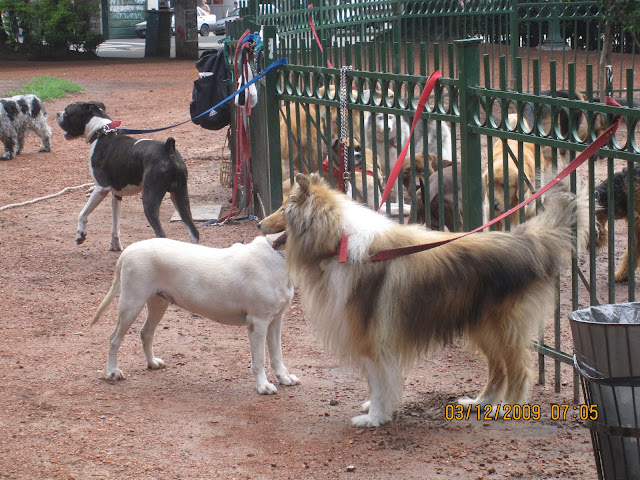 The dog-walkers would like, just leave their ten to twenty dogs outside apartment buildings while they delivered/collected more dogs, and they wouldn't need to be worried about the dogs running into the street or biting passersby or anything like that.  The dogs were well-behaved even in the park, they weren't noisy and never gave any trouble and they'd just stand or sit there.

On a sad note, many dog owners gave up their dogs when the economy went bad - this year more than ever we saw rail-thin dogs without owners wandering the streets at all times of the day and night.  We couldn't even look at these poor little darlings directly because they would come up to you and ask with the pleading look in their eyes for you to take them home.

5.  More remnants of the past: 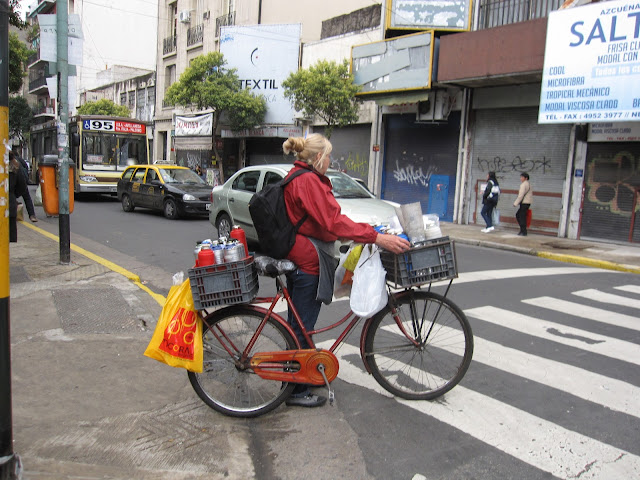 A street vendor of Maté and other drinks.  Why so many different flasks?  Different flavours?  There were also street vendors for roasted peanuts and...cupcakes!  Of course you won't see this kind of thing in Toronto nowadays - but Man Yung remembers that in Hong Kong, street vendors and open-air markets used to be quite common on every street corner even up to the end of the nineties. 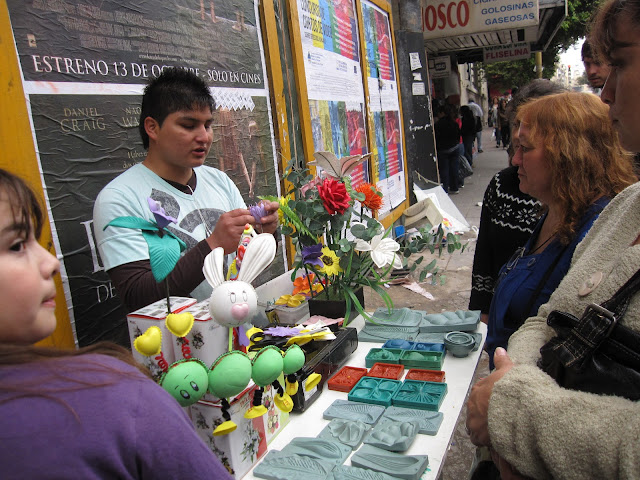 Here's another Buenos Aires street vendor selling some kind of contraption for making decorative flowers out of putty. 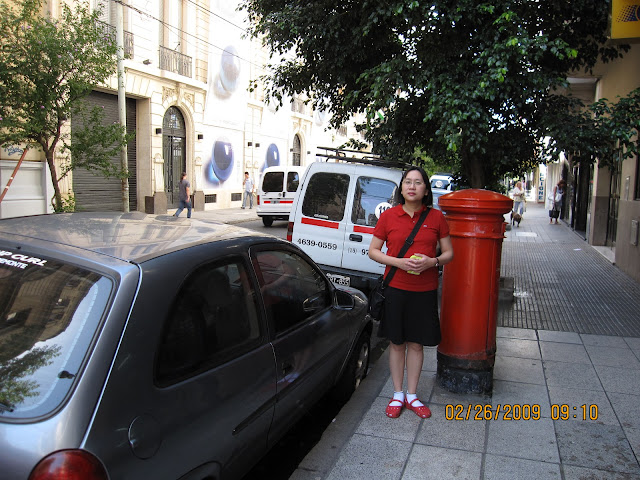 Talk about unusual! These kinds of "British-style" mailboxes were also common in Hong Kong in the past - imagine our surprise finding them in use in Buenos Aires!