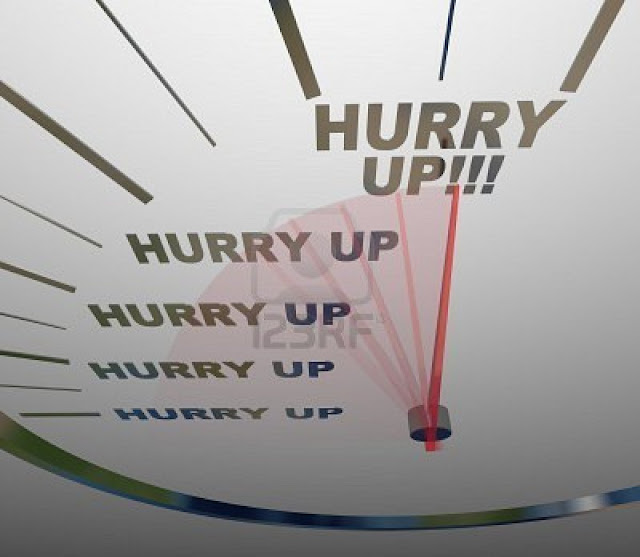 Osvaldo had that exasperated look on his face again - the fifth time since class began.  The object of his exasperation was a slender brunette in tight leggings and four-inch high Comme Il Fauts.  Instead of following the lead of her partner on a relatively simple step, she was going at her own furious pace - which was a great deal faster than the compas with a lot of knee lifting and foot flexing, tapping, twirling and flapping.

The lady looked startled but the funny thing was... she couldn't stop!   She looked at Osvaldo with eyes as big as saucers but whatever was happening from the hip downwards kept on going at breakneck speed.  It was like her feet were possessed by Adornment Archfiends from "Ladies' Tango Technique" HELL.

She couldn't stop rushing.  She paid good money for the (Demonic!) workshops that trained her feet to do so much in so little time - and she couldn't wait to show what she had learned, even though the setting was totally inappropriate.  Who did she think she was going to impress in a class that emphasized slow over quick, and patient pauses over flurries of unbridled nervous jerking movements?  You might laugh, but she isn't the only one so afflicted. Countless times we've been to classes where ladies can't wait to show off their footwork (to the detriment of their following), and gentleman can't wait to show off their fanciest steps (which they had learned somewhere else, perhaps on Youtube).  "Look at me!  Look at me!" they said.  We looked....and rolled our eyes to the backs of our heads.

What's the hurry?  But it seems to us that people in tango are always in a hurry.  Instead of waiting for the cabeceo - the impatient ones are flocking over, snapping their fingers to get someone's attention, pleading or ambushing or bullying or blackmailing others emotionally for a dance.  Are they afraid that they would be losers if they don't dance every tanda or that they have failed if their targeted partner won't dance with them right now?  Everywhere we look there are people rushing through all the step sequences that they can remember as quick as possible, without pausing, legs tripping over feet at least half a beat in advance of the beat. Are they afraid if they wait a microsecond for the compas to actually arrive, they will forget the step?  We look the other direction, and we see more people in a rush - tailgating, or charging forward right into other people when there is no space to move forward. Are they afraid that pausing makes them look like wimps?  Or perhaps if they don't push people out of the way, there's never going to be enough space to let them advance?

Instead of learning to follow, followers learn to be "smart", because it seems to get them to where they want to go a lot faster.  All that fancy footwork - smart, because a lot of the time it conceals lack of proper technique.  There are smart shortcuts too, coming soon to a "Ladies' Tango Technique" near you: "Look at the leader's shoulder", "Look at the leader's feet", "Look at the leader's chest", "Squeeze the leader like a boa constrictor so he can't do any difficult steps", "Make yourself real heavy to slow the leader down" etc. etc.  Some ladies are so busy squeezing, dragging their feet, staring fixedly at this that and the the other it is a wonder that they can even hear the music (actually, I'm pretty sure that they can't), let alone follow - let alone dance!

Hurry, hurry, hurry - instead of taking the time to become better dancers, people want to be performers, teachers, professionals right off the bat.  Armed with a bunch of "Tango shortcuts" - or just a couple of badly executed moves stolen off Youtube - some unleash themselves specifically onto ignorant newbies who couldn't tell good from bad.  Other, equally incompetent - or marginally more competent - dancers see the big "Tango Gold Rush", and they can't wait to be professionals themselves.

Bad teachers teach ignorant dancers who couldn't tell the difference.  Mediocre teachers pretend to be "better" than they really are using inventive marketing, interesting "angles" and impressive resumés.  To further their impressiveness, they might even post videos of themselves performing - if they're lucky, it'll be somewhere in Buenos Aires (Maybe it's their birthday!  Or someone else's birthday!  Or did they bring ten to twenty students with them? - because if they did, some organizers would let them perform too because it has been a quiet month in the milongas).  If they are not lucky, it would a performance in some community centre or shopping mall in their home town in front of bored and unimpressed shoppers. Nevertheless, no matter what the venue, unless they have brought their own claque, they won't likely hear any applause except the polite clapping at the very end because they have failed to make their audience feel something genuine and true.  All the creative marketing in the world wouldn't make you a better dancer than you really are.

Why are we in such a hurry to get somewhere in Tango?  What would you find anyway once you get there?  The money is a pittance.  As for the fame - what's the big deal, having a "name" in a niche of a niche among niche dances?  In our hurry, we miss the whole point of Tango.

The most precious thing in Tango is now.  This moment in your arms, in the music.  A place where it doesn't matter if we dance badly or well, if our skill is high or low - or whether someone is looking at us or not - so long we are truly dancing.  When we hurry, we miss it.  When we don't hurry and we take time to experience and to enjoy what it is like to dance with one another - this moment is ours forever.

So we return back to our poor fellow student - it's the eighth time this class that Osvaldo is exasperated (with visible steam coming out of his head).  Her eyes are still as wide as saucers as her uncontrollable feet did a merry jig underneath her.

"Never mind!" we wanted to say to Osvaldo.  "Have a maté!  No need to be impatient or in a hurry yourself with students who can't stop rushing. They are all kind of like that.  If they get it eventually, they will - but if they don't, not even an exorcist will help!"  But we knew better - Osvaldo takes his teaching very seriously, he wouldn't think that our joke was funny at all.  Poor lady - and poor Osvaldo!