Came across this thought-provoking article today: Bonnie Ware, an Australian nurse who had worked for over a decade with terminally ill patients, compiled a list of the top five regrets of the dying for her blog and book.

Here's the list from the article in the UK Guardian newpaper online (the full article is here):

1. I wish I'd had the courage to live a life true to myself, not the life others expected of me.
"This was the most common regret of all. When people realise that their life is almost over and look back clearly on it, it is easy to see how many dreams have gone unfulfilled. Most people had not honoured even a half of their dreams and had to die knowing that it was due to choices they had made, or not made. Health brings a freedom very few realise, until they no longer have it."
2. I wish I hadn't worked so hard.
"This came from every male patient that I nursed. They missed their children's youth and their partner's companionship. Women also spoke of this regret, but as most were from an older generation, many of the female patients had not been breadwinners. All of the men I nursed deeply regretted spending so much of their lives on the treadmill of a work existence."
3. I wish I'd had the courage to express my feelings.
"Many people suppressed their feelings in order to keep peace with others. As a result, they settled for a mediocre existence and never became who they were truly capable of becoming. Many developed illnesses relating to the bitterness and resentment they carried as a result."
4. I wish I had stayed in touch with my friends.
"Often they would not truly realise the full benefits of old friends until their dying weeks and it was not always possible to track them down. Many had become so caught up in their own lives that they had let golden friendships slip by over the years. There were many deep regrets about not giving friendships the time and effort that they deserved. Everyone misses their friends when they are dying."
5. I wish that I had let myself be happier.
"This is a surprisingly common one. Many did not realise until the end that happiness is a choice. They had stayed stuck in old patterns and habits. The so-called 'comfort' of familiarity overflowed into their emotions, as well as their physical lives. Fear of change had them pretending to others, and to their selves, that they were content, when deep within, they longed to laugh properly and have silliness in their life again."

Now, Bonnie's patients were just ordinary people.  What if they were Milongueros?  What would the Milongueros regret? 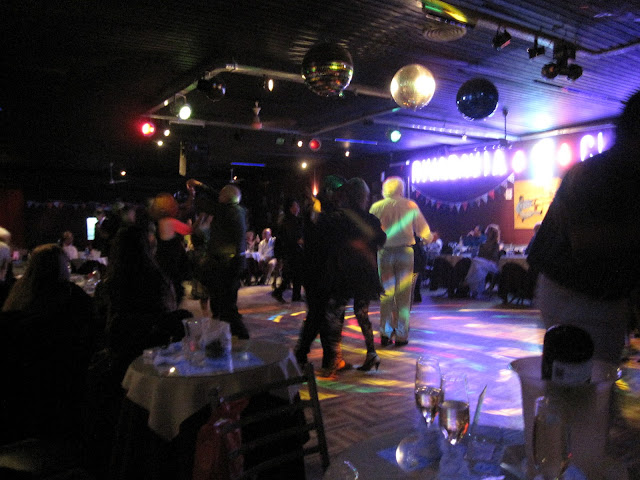 We haven't had the opportunity to interview any Milongueros on this topic, but the Milongueros who we know seem pretty happy with their lot.  Certainly, we can't imagine them with the regrets listed above. Dancing makes them happy, and so long they went to the milonga they always got to see their friends.  In fact, many Milongueros kept on going to the milongas even when they were dying and too ill to dance - they couldn't bear to be away a single minute, despite the pain they were in, and being at the milonga made them feel better.  As for expressing their feelings - they definitely did a lot of it through their dancing, and in any case, the Porteños are an explosively expressive lot as a whole even in their "normal" lives.

As for working too hard - Milongueros, by definition, don't!  Many of the dancers of the older generation didn't like to be called "Milongueros" because Milongueros were the ones without proper jobs, who hung out at the milongas day and night in defiance of any societal expectation.  Those who had to have jobs in order to eat and to support their families (and this is true of some of our tango teachers and friends) just gave up on sleep - they worked during the day, and then slept for two or three hours, and then snuck out to the milongas to dance until dawn...and then went straight back to work again.  We don't know how they did it, but talk about living life true to themselves!  They are Tango!

What would the Milongueros regret then?  Possibly the following:

The fact is, if 50% of the world's population turned into Milongueros overnight, society would come to screeching halt - the wheels of commerce would stop turning, families would be shattered to bits and there would be broken lives and broken hearts everywhere you turn.  Luckily for us "non-Milonguero" tango dabblers, we could strike a balance somewhere between "Enjoying Tango" and "Reckless lack of responsibility for the sake of Tango".

If anyone wants to learn how to Tango and wants to understand the Tango - the Milongueros, with all their faults, are the true experts.  What you don't want to do is to learn from are other Tango dilettantes who are using Tango to make a living with no real passion for the Tango.  A successful non-Porteño teacher once confided in us -

"I don't want to do this forever, you know.  If I could make enough money out of this (or if I could win the lottery) - I'll quit immediately and move to remote grassland plain in the prairies to raise cattle and horses*.  I wouldn't care if I never dance another step, or hear another Tango ever again!"

How could you expect to learn how to Tango from someone for whom Tango is an overwhelming regret?


* Man Yung would like to remind everyone that that Vasily Borodin (played by the actor Sam Neill), Ramius's first officer in the film "The Hunt for Red October", also wanted to move to the grasslands and raise cattle and sheep instead of being a submarine officer!  That was the reason he defected with Captain Ramius (played by Sean Connery) - unfortunately, he got shot by a Soviet agent and died before they could successfully defect.  Talk about regrets!
Posted by Irene and Man Yung at 10:41 AM