Every few years, improvements in technology produces a TV that gets more and more superior than our trusty, boxy old JVC - which was already several generations out of style when we got it.  First there were the "Projection" style TVs.  Then there were the Plasmas...then the LCDs , the OLEDs, the HDs, the UHDTVs, the 3Ds, the ABCDEFGs....

Every few years, we told ourselves, "We should get a new TV this year!"

But then the thought of throwing away our perfectly working set would stop us.  Are we not contributing to unnecessary waste?  Not to mention, you can't really even GIVE AWAY any of these babies nowadays because no one wants them.

We had to console ourselves: "OK, then... we'll wait until this TV dies - and then we'll get a spanking new one!"

We have been looking forward for years to our TV dying, until we stumbled upon this article yesterday: 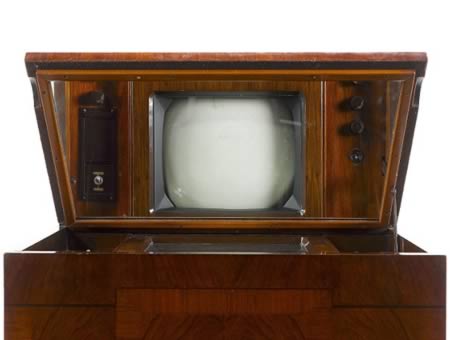 HA, HA, HA, HA..... I will never DIE!  You'll die before I die! Don't even think of replacing me!
That ancient TV may be broadcasting only one channel - because that's all they had in Britain when the set was made - but it still works!

At this rate, it looks like we are going to have to watch our old TV FOREVER.  We won't ever be able to enjoy the newest 3D, HDTV, UHDTV, ABCDEFG experience - just because our TV was built to last.*  Boo hoo!

Maybe "New Tango" was onto something.  Sometimes we have to ruthlessly throw away the Old so that we can replace it with... Swanky New TVs!  What we really want isn't old-timey reliable good-times Tango - we want ever more NEWER and NEWER kinds Tango with lots of innovative acrobatic movements in all the fruity exploding neon with polka dots and zebra striped never-heard of before flavours.  Sometimes we may even want the excitement of mixing it up a little into monstrous hybrid creatures like Bungeeango, Ping-Pango, Craparango or Tachango just to keep our interest up - who wants the old "feeling, embrace and musicality" when they can get more bang for their buck?  Throw it away and bring on the new - bad for the environment, great for the economy!

"Do you think they would ever out-innovate themselves?" asked Man Yung with a sigh one night as we watched the young Nuevo couple do their Rockette kicks all over the dance floor of the popular weekend milonga.

I glanced at their intrusive, space-hogging, robotic dancing and their ugly pants (she looked like a Lululemon harem girl - he looked like he just took a crap in his flappy jeans) with disinterest. "Ah, but they are not even that innovative.  I swear that we've seen all these moves before - in Cosmotango 2004!  So passé.  Even Chicho has moved to something better when he realized that New Tango is Dead, or better off Dead.  It's so sad when young people persist in wasting their time like this!"

* Wait a moment - what the heck do we watch on our TV anyway?  It's either the news or inane little Hong Kong sit-coms.  Maybe we don't need a New TV with ABCDEFG technology after all!

** This is a secret!: Man Yung wanted to get a New TV all these years to watch better and better Adult Videos in 3D/HD-ABCDEFG technology!  But alas, we waited so long and Man Yung got so old, he just lost interest.  The moral of this story is: get your New TV when you are young, you should not dress with your shirt untucked with palazzo pants doing colgadas and volcadas when you are old and decrepid.  For sure!
Posted by Irene and Man Yung at 6:18 PM