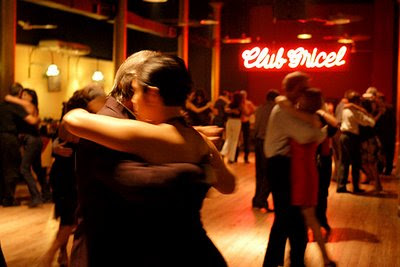 Looks nice doesn't it? Don't be fooled - this photo has been staged.
There's no actual space between the bodies on the dance floor in Gricel Monday Nights!
All you rude jerk-offs, bumper-car drivers, face-dancers, fakers, milonga exhibitionists, fancy high kick figure devotees etc. etc. out there - I highly recommend that you run, not walk, to attend GRICEL Monday nights. It will be a haven for you, because the organizers V. H. Patricio and Adriana Febbroni (Patty and Addy) are just the hosts for you - they will even give you the best table in the house! They love seeing their patrons gouge each other on the dance floor - "La Pista" is exactly like a bullfighting ring, complete with loads of Bull Caca a la mode!

As for real dancers like Osvaldo and Coca Cartery, "Patty" and "Addy" likes to stick them and all their friends in a most stuffy, airless, dark, dank hole in the corner behind all the pillars and in the way of all the people trying to stuff themselves into the milonga from the outside. There are no "real" tables for "real" dancers - only teeny tiny spaces barely one level above the commode.

Yet, they still make Osvaldo and Coca perform for the masses on this very important date - it is, after all, Osvaldo's birthday (if it wasn't they probably wouldn't be seating him at a table, but some place right in the loo) - and flock to his side when the photos are being taken for the obiquitous tango "revistas". Knowing full well that Osvaldo has been gravely sick with respiratory problems for a whole year, and still not yet 100% recovered, "Patty" and "Addy" force him to dance a "birthday" vals with all the heavy stiff chicas and then play another vals so that he will continue to dance, dance, dance - in the hope that so that he will die on the dance floor like a glorious matador of days gone by. Maybe that will be just the publicity needed to make even more people flock to the milonga, so instead of having one in five people complaining that they have paid the entrada and have no place to sit, the odds will be one in three, or perhaps one in two!

But I'm being too mean. What "Patty" and "Addy" really want is for all the old, good dancers to die off - they just occupy space in their milonga and they are too fragile and slow anyway. In the place of one milonguero, they can stuff say, AT LEAST FIFTEEN MORE American/European/Asian tourists used to dancing "contortionist" style in the milongas - you know, the way that they can stuff twenty clowns into a Playschool car at the circus? Boy, those foreigners are much tougher and they pay good and drink lots, they'll the ones you want in the milonga, not "real dancers" who need space and good music to actually dance tango! Running a Milonga is rough business, you know - there may be enough bodies in the room to make your milonga into a firetrap, but that doesn't mean you can break even, especially with the money that you are throwing away on your fake glow in the dark tans and plastic surgery. "Patty" and "Addy", after all, have to make sure they are extremely pretty in their ads and in their publicity photos - would you attend the milonga of an ugly person? Please.

I heard that the owner of Club Gricel is Hector Chidichimo (or is it Chimichurri?) Does he actually encourage this kind of thing from "Patty" and "Addy"? Does he get paid a premium per person over the fire hazard limit? God knows. I just know that he can stand by (he was present, seated two tables away) while Osvaldo is treated in this obnoxious manner and throw his hands up and say he can't do anything about it. Talk about respect from one dancer to another - El Senor Chimichurri certainly has LOADS of NONE. Applause all around.

Rumor has it that Hector's son, Chimichurri JR. has been invited by someone in Toronto to come to Toronto to teach MILONGA TRASPIE, or something that looks like MILONGA TRASPIE but bears no relation to the music (judging from the "astounding" performances that I've seen on Youtube). Man Yung and I are foaming at the mouth for his arrival. If this darling Chimichurri JR. has within his genetic makeup any of this "odor de GRICEL" from what I can tell from this fiasco, Man Yung and I will certainly bring a little "Air de GRICEL" welcome for him! Lucky duck!
Posted by Irene and Man Yung at 10:53 PM

Wow, someone is mad!!

You are right about the hordes of tourists at Gricel on Monday, but then again, there are always stampedes in the famous milongas during March and in November--the Tango Tourist Seasons.

However I wouldn't worry about Osvaldo--he's no victim. He always does exactly what he wants to do! Believe me, Adriana y Patricio couldn't make him do anything he didn't want to.

I agree with Mondays at Gricel. I stopped going a long time ago for many of the reasons you published.

But don't burn Hector please. He rents the place on Monday nights. The organizer can do what he/she/they wants on that night. I think you owe him an apology as he is a really nice man. He does the milonga on Friday/Saturday/Sundays and the crowds are very different. It is one of the few milongas where there are no drugs/prostitution or many of the other things you might find in some of the other milongas because he does not allow it.


As for Gustavo I don't know what you saw on Youtube but he does dance very well and his classes here are not only well attended by foreigners but by Argentines.

You don't have to like every dancer or every style, but Gustavo and VIrgina dance nicely and are recognized as so here in Buenos AIres. There is no reason to trash people you not only have not met but have never actually seen dance in person or taken a class from.

There are lots of "chantas" and "vividores" here ready to suck your money up as teachers and dancers and Gustavo and Virginia are neither. They are nice people.

Also no need to defend Osvaldo and Coca. They are paid for their performances and they dictate what they will do, or maybe you did not know that.

I realize you had a less than stellar time there, but you should be careful what you write. Our blogs are widely read and think about what people might say about you.

If you read my blog then you know I am less then thrilled with the invasion of the foreign dancers who are ignoring our codes and creating nightmares for the locals. While I support your opinion, it is the delivery, it could have been a little less harsh.

You yourself are a foreigner in our country, and us locals (I am a foreigner with permanent residency) have to accept all of you in our milongas. Think about that. Because when they read what foreigners write in blogs whether they agree with it or not, when it is negative it makes them very angry.

I hope your next dances are better for you.

When Patricio sees me at another milonga, he always asks when he'll see me on Monday at Gricel. I tell him he won't because it's a zoo. Too bad that Osvaldo didn't celebrate his birthday at Atilio's milonga instead. He would have been well received.

Thanks for letting others what to expect if they go to Gricel on Monday.

Thanks for telling it like it is, Irene. Dancers need to know that there are milongas where it's all about $$$$$.