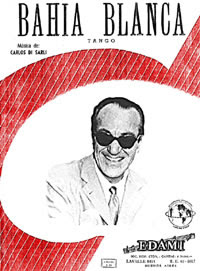 Ever since Sally Potter danced her “Milonga Triste” to this tango with Fabian Salas and Gustavo Naveira in an abandoned barber’s shop, we have been blessed with a veritable potpourri of interpretations of El Señor de Tango’s signature tune.

We know that Carlos Di Sarli was born in Bahía Blanca, and that he had tenderly dedicated the score of his composition to the city of his birth. We also know that this is a beautiful tango, filled with feeling and nostalgia. But what does it all really mean?

Since neither Man Yung nor I can ever profess to know anything, we can only humbly look to that venerable institution YouTube for answers. And in YouTube, not only is there potpourri - if you wish to go by the thesaurus, you may also find a ragbag, assortment, hodgepodge, collection, jumble, variety, medley, assembly – all in all, a cornucopia with a random sprinkling of cambalache:

Question: "Mr. Zotto, what does it all really mean?"
Answer: "It means that Ms. Ermocida dances robotically without regard to following the lead while trying to do as many adornments as the music cannot possibly allow. We hope that people will look past the music and concentrate on her footwork. Because if they can't get the music (and I bet you 99% never will), at least they will get an opportunity to fiddle with their feet. You are aware, of course, that Ms. Ermocida is part of a very lucrative "Lady's Tango Week" festival every year? You should go. Not only will you learn lots of extra adornments - you also get to gawk at Pablo Veron!"


"Ouch! My back is so straight I am literally giving myself a hernia. That's the key to winning the Campeonato - stiff upper back and plenty of enrosques. What was the question again? Oh, the music - of course it means, 'swirly feet, swirly feet, double swirly feet' - is there any better way to evoke the notion of 'ocean'? No, to interpret this tune you don't need to follow the music - ever hear about water having musicality? Ridiculous."

Man Yung: "Actually, this is not at all bad. Chicho's musicality is pretty good - not 100% dead on, but mostly fine. This is one of the highlights of CITA 2004, in fact. Too bad stuff like this has set off an explosion of 'Folks, it is now acceptable to dance bad nuevo to good traditional tangos.'"


Man Yung: "This is a surprise, Peralta looks like he is concentrating real hard on interpreting this! I don't think I've actually seen him dance better. Except that his partner is sometimes going faster than he is leading."
Irene: "Do you think that green tea + Ovaltine would be a good ice cream flavour? .... Oh, you were talking about Fabian Peralta."


Man Yung: "Watching this, I'm starting to feel a little Bahía Blanca."
Irene: "You dissed this two years ago when you first saw it. I told you it was pretty good."
Man Yung: "He wasn't dead on with the music 100% of the time the last time I saw this - and he still isn't dead on."
Irene: "Whatever."

Man Yung: "What little we could see of the performance is pretty darn good. Can you see that Geraldine does not do a single adornment from the moment she starts dancing to the moment that the camera cuts away to the shot of the people gabbing?"
Irene: "Too bad that most followers are only taking notice of Geraldine when Geraldine is adorning - rather than when she is not."
Posted by Irene and Man Yung at 4:30 PM

Let me get this straight: these folks

are criticizing all the above couples for their musicality and over-embellishments?

You are absolutely right, we also agree that in that video, there is a problem of synchronization in the video with the music. Whether that it is a problem with the video recording and posting process on Youtube, or whether it is a problem with our dancing - we cannot be 100% sure of either. The only ones that could be the judge of that are the people who actually witnessed that performance live at Lulu Lounge.
As for the right to criticize, have you ever been to a restaurant and had found something unacceptable about the food? Would it reasonable for the chef to respond to your complaint by saying "You have no right to complain because you are not a professional chef, you don't know what you are talking about?" We are not professionals, we are just "small potatoes", but it doesn't mean we are not entitled to our opinion. Just because someone is a "Master", it doesn't mean that everyone else not dancing at their level or with the same level of fame and power will have to censor their opinion about the said "Master" - this would be an affront to free speech. As Maria Nieves has said in an interview (this was posted by Janis Kenyon on her blog post about Maria Nieves recently): "Nobody is the owner of the truth in tango." It is always important to have a public forum for discussion, and by presenting our post as such we are opening the forum for comment on this topic (such as yours).
As for embellishments, I have as recently as last week admitted on this blog that I was once a bad an amateur adornista as any in the Tango world. I now have a problem with thinking too much about not doing adornments (instead of following). No matter whether I am here or there with respect to adornments, it is an evolving process and a process of learning for me.
The video of us dancing last August at the Amnesty International benefit was not posted by us. Perhaps it was posted by somebody who wanted to embarrass us with an example with our own horrible dancing? Anyway, we have to apologize to you, Nancy, and to any other unfortunate persons who has stumbled upon this video for any distress caused, especially if you had to run for the bathroom and wash your eyes out with soap after this trauma!
We hope that if people wish to post candid videos of our dancing on the internet in the future, they are duly warned to print a "Caution" notice beneath the video as follows: - "WARNING: Watching this video may cause psychological damage and recurring nightmares. Irene and Man Yung are not responsible for any damages arising from such action. Proceed at your own discretion."

Thank you for your comment, we look forward to more comments from you in the future!