We weren't planning on mentioning the Tiananmen Square massacre anniversary this year... but then some bizarre news showed upon the internet.

Secondly, it hailed heavily in Beijing.  The saying "Frost in June" in Chinese culture relates to the notion of the heavens crying due to a great injustice.

Were the numbers at the Stock Market an omen?  Did the sky shed tears for the horrible injustices inflicted on the Chinese people by the corrupt Communist Party?

Is China reaching a breaking point?

Man Yung hopes that that the days of the Communist Party are numbered. 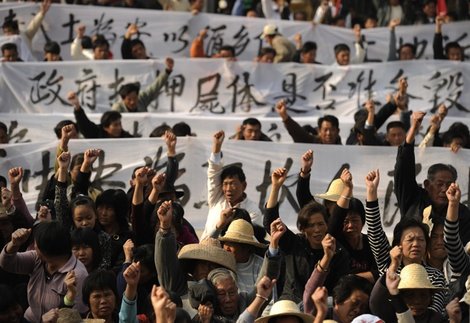 Wukan Village protests - one of many protests in China against the corruption of the government against the people
Posted by Irene and Man Yung at 10:04 PM