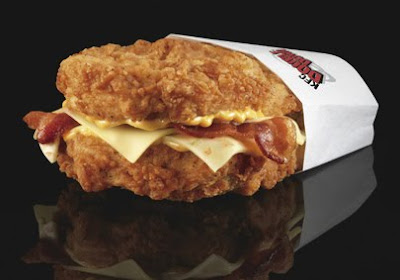 Magic 8-Ball say: This is your Future
Evolution into something bigger, better, greater, mightier, tastier - it's not only a trend, it's DESTINY. Just look at a couple of reports in the Toronto Star lately and you'll see what we mean.

Firstly, look at the KFC "legendary", "culinary coronary", Double Down sandwich. A sandwich that gets to the lowdown on taste:

After months of maximum hype, the Colonel’s chicken empire introduced its latest “sandwich,” the Double Down, which uses two slabs of fried chicken in place of the bun. In between are bacon, cheese and sauce.

Then, there's the "Worst Beverage in America" and "Blended Diabetes in a Cup" - Cold Stone Creamery's PB&C Shake:

One of Cold Stone Creamery’s new flavour ice cream shakes, with 2,010 calories and 68 grams of saturated fat, was declared the unhealthiest drink out of a list of 20 worst, according to Men’s Health magazine.

The ice cream company’s peanut butter and chocolate milk shake packs the equivalent of 68 strips of bacon in saturated fat, the U.S. health magazine’s Eat This, Not That website declared.

Mmmmmmmm..... reminds of my youthful days when I used to scarf up all the the MSG soup base packets from packages of Chewy Instant Noodles - by themselves without the noodles. Sure, it gave me headaches and violent nosebleeds, but what yummy-licious! Now that Corporate America is making salty oily deep fried chicken "sandwiches" with no yucky vegetables and no bread and ice cream shakes replete with the lardiness of 68 strips of bacon - my wildest dreams are coming true!

Humankind is always striving for the better and better. That's why all these Tango-Fusion dances - "Jango", "Swango", "Bacha-Tango", "Tango Salsa", "Ta-Chango", "Bungeeango", "Craperango" etc. - are all such winners. Why waste time on the "trance inducing", "mind-melding", "life-enhancing" and "soul-enriching" a.k.a. BORING aspects of Tango when you can just take the best bits, put it in a blender with some dynamite and VOILA! No embrace, no musicality, no feeling, no connection - but lots of jumps, lots of splits, lots of ganchos, lots of "colgadas" and "volcadas", lots of poses, plenty of teeth grinding and yes, continuous ochos. That's what people really want - more saturated fats, more sodium, more sugar, more calories = more taste!

And why bother to look to Buenos Aires for the future of tango when we can see it right here in North America in the latest edition of "Dancing with the Stars"? We present: "Tango Brutale" by Erin Andrews and her professional partner Maksim Chemerkovskiy:

HOLY COW!!!!
Like us, you too may be sitting in stunned awe right now. You must be completely, utterly dazzled - but did you observe carefully at 3:30 and 4:02? They have finally got to the Double Down, PB&C core of "TANGO": 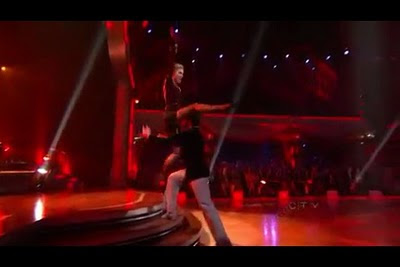 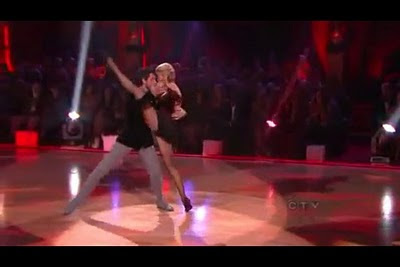 Erin nearly broke Maksim's neck when she made that leap from the stage - so we have a lot to be thankful for. Because what we really, truly want in Tango, the thing that makes us salivate - is nothing other than the spectacle of FLYING BOMBACHAS.
Posted by Irene and Man Yung at 11:54 PM

Hilarious Irene, and also cringemaking, especially that KFC number!
We need to see more floor action like that only in order to give them a good kick when they get too close. ;)

How can someone so beautiful look so ungraceful?????!!!!

The KFC number is more deadly than anyone can ever imagine - not only can one be decapitated by the "crotch first" leap, it clogs arteries and causes heart attacks!

Dorian, my partner in crime, says you are the Stephen Leacock of Tango satire. Keep it up. We definitely need more humour and less ganchos.

Thanks for the compliment! But it isn't our fault. So many of the situations we encounter in tango are absurd and ridiculous. THEY ARE MAKING IT WAY TOO EASY FOR US!

In a perfect world, we should have better dancing and less satire - but obviously, reality is the exact opposite!

Thank you for enjoying our posts and your comment,