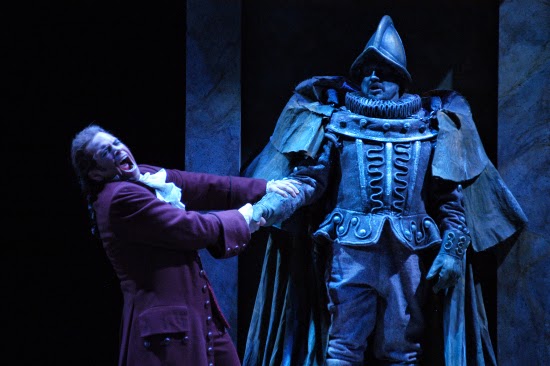 Apparently, I'm Don Giovanni and Man Yung is the Commandatore.  If I don't repent now, he's going to drag me straight to the depths of hell (of forgotten and cast off past loves)!

Man Yung and I have different perspectives on love - especially "Old Loves".  The "Love" we are talking about in this sense could be for people, places, things, activities...

Man Yung says that whatever he has loved, he will love forever. This goes for artworks by Picasso and Modigliani, music by Beethoven, Martial Arts of any type (he still practices at every opportunity), Scotch (and some Bourbons), films with Alain Delon in them, etc.

Man Yung even claims that he loves all his ex-girlfriends.  And all the sweaters they knitted for him.

"But you aren't with them anymore," I said.

"Ah...but that hasn't stopped me from loving them until now," said Man Yung.

While I pondered that strange notion of still loving everything (including ex-girlfriends you are no longer with), I thought about my own "Old Loves".

I certainly don't love my exes anymore.  I used to be a Martial Arts fanatic, but no longer.  I still love the opera, but I don't listen to it more than a few times a year.  I still knit, but instead of producing one sweater a month, I've slowed down to a sweater every 1.5 to 2 years...

"The problem you have is that you latch onto something - and then you become completely obsessed with it.  You think about it night and day, you devote time, money, energy into it...and then you run out of steam and eventually cast it aside for the next obsession," said Man Yung.

I protested.  "But my method is extremely productive.*  I got my black belt within like, three years.  I knew everything there is to know about opera and opera singers and even learned the lyrics to some arias and duets by heart.  I produced ten to twelve sweaters a year.  Even with Tango - I learned how to dance, I found out lots of information about Argentinian culture and history - I even learned Spanish and made loads of Argentinian friends.  Every time I fall in love, I achieve something!"

* About ex-boyfriends - I was just relieved to have a boyfriend!  Doesn't matter that we didn't really like each other and we were completely incompatible, at least I was dating!  How's that for cynicism?

"Love shouldn't be about achievement.  You are like Don Juan and his conquests - you conquer something that takes your fancy, put a notch in your bedpost (or a mark in your notebook), and then move onto the next one.  You leave a trail of broken hearts behind you.  The sad neglected karate uniform at the bottom of your closet. Opera CDs and librettos that have not been enjoyed in years.  A half-finished knitting project languishing on its needles.  Sooner or later, you may even stop loving Tango (and/or me).  Are we going to have to donate your mountain of Tango shoes (and your poor husband) to Goodwill?"

Man Yung has been nagging me for years about this one.  He believes that I shouldn't take a journey just to get at the big shiny goal at the end of it.

Thanks Man Yung for that fascinating piece of philosophy - but I'll stick to my flings.  What's wrong with chasing after bright shiny new things?  Everybody does it.  I love me some carrots on a stick - if something isn't being dangled in front of me, I won't be moving forward at all but sitting on my couch, eating chips and watching Seinfeld re-runs!