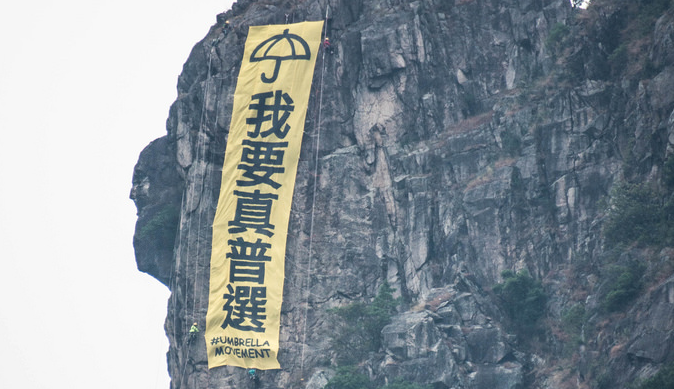 Man Yung has a friend in Hong Kong who has been a fervent supporter of the Chinese Communists all his life.  Back in the 60's and 70's when Man Yung was a young Communist fanatic himself, he and his friend would participate in lots of fun activities arranged by the Hong Kong Communist associations, like acupuncture classes, ping pong, Communist Choir practice - and the always exciting: "Participating in demonstrations against the British Colonial Hong Kong Government and throwing rocks at police."

"What?" said Man Yung when I rolled my eyes at this.  "I think young people should always experience a stage in their life when they have ideals."

Notwithstanding starry-eyed idealism of Man Yung, his friend and many other youth of their era (including a physicist uncle of mine who was so captivated by Communist Propaganda he went all the way back to China from the U.S.A. to "Help Build the Country") the Chinese Communist Party has been a complete and utter disappointment in ways that George Orwell had easily envisioned in "Animal Farm" and "1984".  Still, Man Yung admits he clung to his hope that the Chinese Communists would finally "do good" one day... until June 4, 1989 when the Chinese Communists sent in troops and tanks into Tiananmen Square to kill and run over defenceless student protestors who just wanted the corrupt Communist government to stop being so corrupt.

Despite having devoted a good deal of his life and energy to the support of the Chinese Communists and the Communist ideal, Man Yung said that once he saw what the Chinese Communist were capable of doing - i.e. ruthlessly massacre innocents to continue their iron grip on power and to maintain the corrupt status quo - he stopped believing that there would be any good at all in any Communist regime.  So long there is only one party ruling China with absolute power there will only be corruption and misrule and everything will go to hell in a handbasket.

Man Yung's friend however, couldn't admit that his ideals were wrong or that what he believed in was wrong.  He had sacrificed even more than Man Yung in support of Communism - he had been persecuted by the Hong Kong government for his political activities and had to suffer the split up of his family as a result of the persecution.  I think his heart bled when the Tiananmen Square Massacre happened, and his heart bleeds every time he hears another Communist atrocity which must be every day now (of which a very short list can be found on this blog in our Chinese Fairy Tales).

Whenever Man Yung talks to his friend on the phone, Man Yung talks to his friend about the Communists and how they have turned modern China into the most corrupt, debauched, dissolute, unscrupulous etc. etc. society ever in the whole history of China.  Man Yung's friend can't refute what Man Yung says - not matter how much the Communists try to suppress and whitewash, their nefarious deeds are in the news every day.  But at the end of the conversation, Man Yung's friend sighs and says in not many words that he continues to have faith in the Communists.  He is going to go to the grave with a broken heart.

"Irene, the lesson you have to learn from this is that if you are wrong, you admit you are wrong and you can move forward."

"Ah, easier said than done.  Everyone I know is adamant on soldiering along on the same track even when evidence proves they are entirely wrong!"

I'm not going to give you a list here of people who couldn't change their track.  In life as well as Tango, people would rather continue to be wrong than change their thoughts and ways.  That's why it is so hard for people to improve their lives... or their dancing.  I'm thinking, there are going to be a lot of people who are going all the way to Tango Hell in saggy nuevo pants with untucked shirts over potbellies doing colgadas and volcadas, ha ha.

Has anyone ever splintered into a million pieces admitting that they were wrong when they were wrong?  No.  Man Yung tells me that it is funny, the Chinese Communists and Chinese people in general have a terror of "losing face".  "They would rather lose a fortune than lose face - they would rather lose their lives than lose face!" Man Yung said. "Does that sound rational to you?  The Communists have ruled China for over sixty years.  They just had a big meeting in which they had a resolution to start "Govern the country by Rule of Law".  Ridiculous! What the hell have they been doing up to now?"

The student protestors in Hong Kong have been protesting, sleeping in tents on the streets for a whole month now.   Tens of thousands of people peacefully protesting for over four weeks without throwing a single rock, burning a single trash can, or breaking any window.  The government however has fired tear gas, shot pepper spray, sent in triad members to beat on protestors, got police to beat protestors with batons and even throw shit at protestors from roof tops.  We are in awe of the student protestors to have kept so calm in face of such provocation.

"I have been on this planet a long time and I can admit I am not a peaceful person and I am quick...not to use peaceful tactics," said Man Yung.  "There's one thing I have learned from the student protestors, and that is that violence does not solve problems.  Peaceful civil disobedience is a powerful thing."

Knowing how the Chinese Communists are, they cannot admit they were wrong and cannot do anything that they think will make them lose face.  It would take miracle for them to back down and really give Hong Kong genuine universal suffrage.  Despite the overwhelming difficulties, we are hoping that the protestors will stay safe and that the protests will come to a peaceful and satisfactory end.  No matter what happens in the end, we are proud of the students who led the protests and everyone who came out to protest with them in support.