We went to a friends' house for dinner recently.  We don't really like to go to this house to eat because the house REEKS of cooking smells, and after we go there the smell is in our clothes, our hair, everything!  But we can't refuse, it would hurt our friends' feelings if we turned them down.

This time when the invitation to dinner came, we tried to be smart.  "Look, let us cook dinner and bring it over!" we said.  So we made a couple of dishes (and we had to be super rush, since it was on a weeknight after work) and went over.

"It really seems like there is less stench today!" I whispered to Man Yung as we served our hot food to our friends.  We spent a pleasant evening eating and chatting and having dessert and coffee afterwards - without that dreadful sensation of "Ick, I can't wait to get home to take a shower right now!"

However, as we were driving back home, Man Yung sniffed his clothes, rolled down the windows, and said, "Irene, there wasn't any cooking in their house this evening, so why do I smell like a stale fried pork chop!"

We didn't notice it when we were sitting in their house, but the cooking smell was permeating our skin minute by minute!

"Oh boy, even when they aren't cooking, the smell is still there, seeping out of the walls, floor, ceiling and even the furniture.  That's what decades of roasting chicken, pan-frying fish and stir-frying pork with peanut oil without proper ventilation will do!"

And our friends are completely oblivious to the problem because they have been living with that smell for so long, they can't even smell it anymore.

"This reminds me of an ancient Chinese saying," said Man Yung, who always has edifying Chinese sayings on the tip of his tongue (lucky me!).  "When you are dwelling among fine cultured gentlefolk, it is like living among fragrant orchids - and after a while you aren't aware of the perfume.  However, when you are dwelling among ignorant lowlife louts, it is like working in an abalone shop.  After a while you don't know it's stinky."* 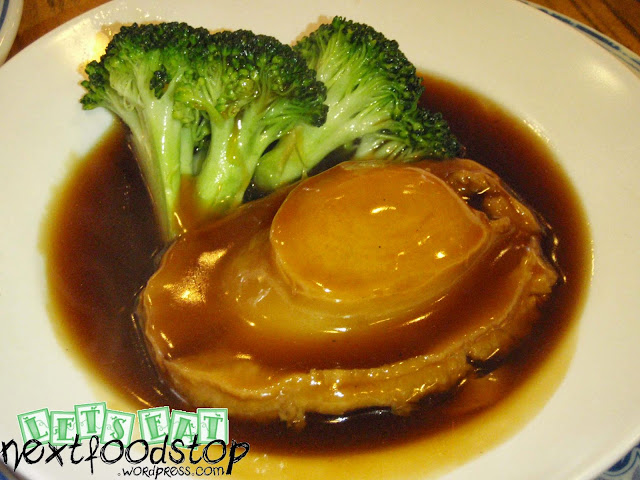 "Wow, delicious and expensive!
Who knew that abalone used to be one of the top disgusting smells in China?"

*And when you dance grotesquely in a community of other tangueros who also dance grotesquely, you would feel completely at home and you wouldn't know that you suck!   But here in Toronto, we also get this strange phenomena: People who dance like they are the love-child of Quasimodo and Elaine Benis at venues where all the other people are dancing quite nicely - and they don't feel out of place at all!  Are they immune from the influence of good dancers because they are encased in a magical invisible bubble of self-sucking obliviousness?  Sometimes they are so confident they even put on PERFORMANCES for all the other dancers who are scowling and not pleased - remember dear Toronto Organizers, please do not spring this SURPRISE on us and warn us well in advance so we can decide NOT to come to the milonga and stay home!

"I thought abalones were supposed to be prized delicacies! You can't get any decent ones unless you paid like, hundreds of dollars for an ounce these days. I didn't know they had a reputation for smelling horrible," I said.

"This saying comes from hundreds of years ago, when people probably didn't know how to preserve abalone.  Abalone smelled so bad, when the Emperor Qin died on his travels in China and his ministers wanted to hide the fact of his death in order to prevent unrest among the people, they pulled down the curtains in his carriage and put a load of abalones in the carts next to his carriage.  They continued to travel for weeks, stopping and cooking three meals a day for the Emperor so that no one would realize he had died.  Even though the Emperor's corpse was decomposing badly in the hot weather no one suspected he was dead.  If anyone commented on the smell, the ministers would  point to the smelly abalones and say there was no way around it, the Emperor took them with him everywhere as they were one of his favourite foods."

"Hee hee, that's a fun fact about abalones.  I'll keep that in mind the next time they serve abalones at a banquet - I'll tell that story and when everyone would rather barf than eat any I can eat as many servings as I want!"