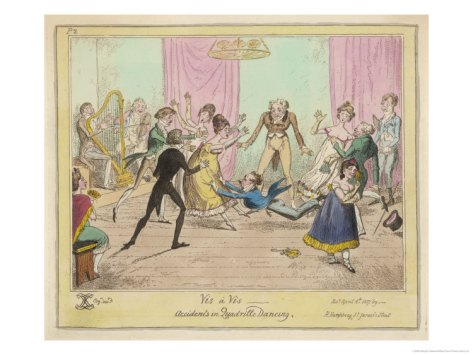 Accidents in Quadrille Dancing - Whoops, how did that happen?

Man Yung is frequently amused by weather reports in Hong Kong.  For example:

"Today, the wind will be blowing in no particular direction."

"Ha ha ha!" laughed Man Yung.  "They are reporting this kind of garbage weather forecast not because they don't can't predict wind direction.  They are doing this just because they are scared to be wrong!"

Weather forecast is actually easy - meteorologists have many fancy machines and algorithms and experience and stuff - compared to, say, the difficulty in predicting where the local Mr. Tango Navigational Disaster would head next.  If you are dancing in the vicinity of any of these Four (or maybe Eight or even Sixteen is more accurate) Directional Bouncers, you can't tell whether he will go left, right, backwards, or forward next.  The only thing you can be certain of is that within the next twelve minutes, there's a 80% chance he will be volleying right into you and your partner.  Put two or three such persons in one milonga and the whole floor will descend into chaos!

Some of the Bouncers have their eyes closed.  They won't be improving until they start looking where they are going!  Some of these Bouncers have their eyes open, but they just don't give a s*** about the people around them and they expect people just to get out of their way.  Maybe they are like this because they consider themselves "Tango Professionals", or perhaps "Tango Veterans", and they think they are better than everyone else.  These guys will need an a**whooping to get them going the right direction.

An embarrassed voice at the back of the lecture hall pipes up. "Not all Four Directional Bouncers are like that!  Some of these Bouncers are nice, considerate guys.  They don't want to collide into people every 30 seconds.  What are they doing wrong?  And what could they do to fix it so that they can stop attracting Irene's 'Evil Eye'?"

Ahhhhh....true.  Some nice guys out there are navigational disasters despite their best intentions.
Part of this is due to not being able to adapt pre-learned "step patterns" to dance floor situations as they arise. The most common problem, however, is due to a move that we will call the -

Many of these navigationally challenged gentlemen have a limited step repertoire.  It's hard to memorize more than five movements (including walking) and lead them with followers of different heights, sizes and experience levels in the pressure cooker known as "The Tango Dance Floor".  The leaders literally have their hands full trying to lead, to stick to the line of dance, to regurgitate "steps" - while trying to keep up with the tyrannical compas.

We've observed that one step all leaders seem to be able to do quite naturally* consists of the leader first stepping forward (and the follower stepping back) - the "Rock Step".  With the next step, the leader brings the follower back into a change of direction.

* In fact, when we asked one inexperienced leader about this step, he said he didn't learn it any where - he just "invented" it one day.

Unfortunately, this next step change in direction often results in the "KAPOWEE!!"  By bouncing into any ol' space, including blind spots - this could be left, right, or even backwards in the line of dance - the leader will disrupt or even slam into people around him.  You can imagine how hazardous it can be when clueless leaders are doing this every fourth or fifth step, and sometimes running amok for several additional steps after changing direction.

The solution is very simple, but we have not seen it mentioned anywhere.

All the leader has to do when the urge to do this natural simple step arises, is to lead the "bounce" change of direction step INTO THE DIRECTION OF THE LINE OF DANCE.  That means not left, not right, not backwards or any of the other seven to fifteen different directions - but FORWARDS, space allowing.

If you aren't tailgating (which we will rant about soon for the purpose of these series of discussions) when you do this, YOU'LL BE FINE.*  TA-DA!

** This easy to remember tip can be applied to ANY step which entails a change of direction.  Go FORWARDS if possible at all times.  And you can even change the length of the step you take depending on the space - you don't have to always take a big stride if there is no room!
Posted by Irene and Man Yung at 7:48 PM