Have you read Tangocommuter's blog lately?  I'm jealous.  He had a dream about Tango in Buenos Aires in the future.  Although it wasn't exactly a nice future (for Tango), it reminded me of the times in which I, too, also had clairvoyant (or at least hallucinatory) dreams about Tango.  Hey ma, I want to be a Tango Psychic too!

Quite determined not to be bested, I recklessly ordered and consumed the biggest bowl of Dac Biet (Special) Vietnamese Phó beef noodle soup available on the menu of the local Phó shop.  Then, I waited for LESS THAN THREE HOURS before I took a nap.  My friends, I knew I risked potentially FATAL (or at least acid-refluxy) indigestion (especially since there was way too much MSG in the broth) but I knew desperate times require desperate measures.

It worked - before long, I was in a trance.  Things were a little complicated at first - there were a lot of scenes of me running around the sleepy suburban neighbourhood of Agincourt screaming while being chased by giant, multicoloured snakes who recited lines from Shakepearian tragedies with their best Darth Vader voices.  There was also, I remember, quite a lot of ominous Buddhist chanting - especially whenever anyone tried to read a legal document out loud to the red-headed blind lady bedecked head-to-toe in baroque gold jewelry in the shape of stringy cooked ramen noodles.

Then, the clouds cleared up, the skies parted, and the rainbow psychedelic haze descended - and I too, saw the Tango Future.

Man Yung and I had traveled all the way downtown to the weekly Traditional Toronto Tango Milonga only to discover upon arrival that the organizers had, without any prior notice, decided to host the closing milonga of the very newest trendissimo Nuevo Tango Festival in town.  "Purely a business decision!" they said while grinning and jumping up and down enthusiastically - because even the most guardia vieja, strictly codigo traditional milonga sometimes has to do weird, contradictory things like showcase flagrantly non-traditional, stage and/or nuevo visiting professionals to "draw the crowds".  Because, as everyone knows, what people really want to do is not to dance, but to learn the infamous triple boleo/triple enganche with spinning back mule kick combo.

We grumbled but we weren't going to turn back and drive all the way back to Scarborough.  We changed into our tango shoes - except I had a lot of trouble because my Comme Il Fauts were now in the most trendissimo design ever - consisting of strips of yellow velcro and clear plastic that could only be assembled onto my feet after following a complex diagram drawn by MIT engineers.  Meanwhile a whole lot of people (we recognized none of them - must have been from out of town) arrived and entered into the dance hall.

We followed them in.  The milonga was in full swing.  All the dancers were dressed in clothes and hats with polka dots and I swear the dance floor was covered in polka dots too. 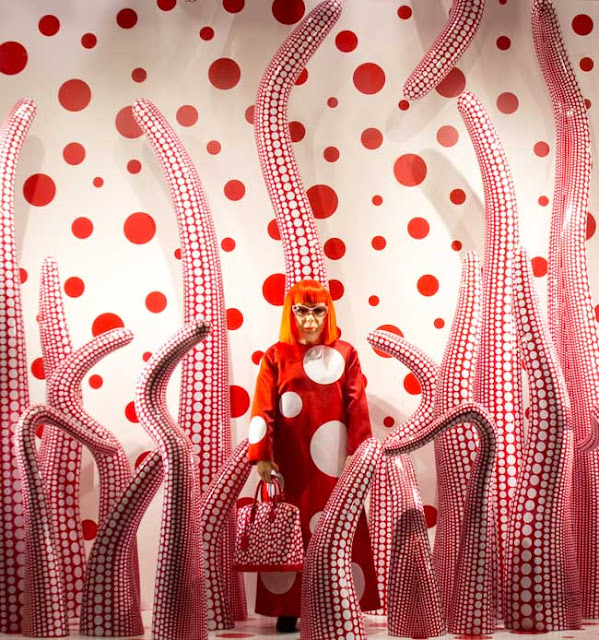 "It's not as bad as you thought," said Man Yung.  "At least they are dancing in close embrace and following the line of dance!"

I was suspicious.  "Yes, it looks like they are dancing in close embrace - but look closely, they are all doing that really annoying 'syncopation stepping on all the beats at strategic moments' thing masquerading for real musicality!"

Not that it really mattered.   The music was all D'Arienzo from the 70's or "modern interpretations" of the classics - and there were no tandas or cortinas.  No-one knew what was going to play next as anything could follow anything else.  A local Toronto DJ was standing over the stereo but when we caught his eye, he could only shrug helplessly because he wasn't really in control of the music system as it had been possessed by demons out of Tango Hell.

"OK, Man Yung - this doesn't look good, but we'll hold the fort - I mean dance - for as long as we are able to, and then when we can't stand it anymore, we'll go!" I said.  "However, if anyone viciously bumps into us [the pretense of "close embrace" was being gradually discarded on the dance floor and couples here and there were starting to fling around dangerously] we'll have to be prepared to fight them!"

I hadn't even finished speaking when one of the couples barreled into us.  And they had the audacity to look surprised.  We hadn't even started dancing - we were still standing on the sidelines!