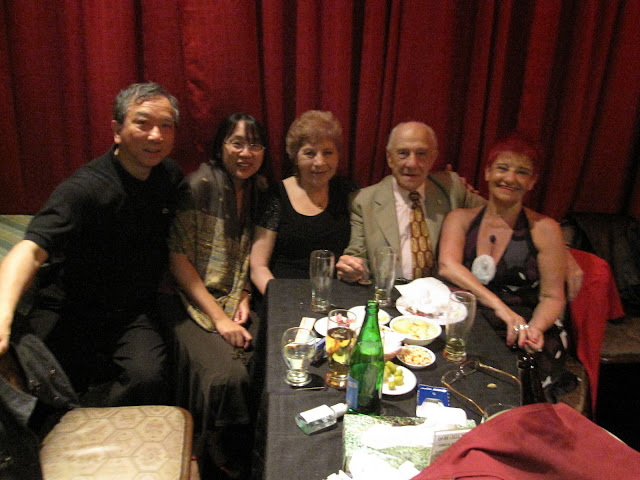 We hang out with Roberto and Olga and Susy Tilbe at Lo de Celia
We had already made plans to meet with the fabulous Susy Tilbe of Milonguisimo before we had even landed in Buenos Aires.

"You are arriving on Wednesday?  Let's meet up at Lo de Celia - I'll reserve a table and see you there!"

Luckily we did not miss our connection in Lima so we were able to make it to meet Susy, Roberto and Olga, the very first night we arrived.

Hanging out with Susy is so much fun.  She is a beautiful person, inside and out, and, of course, a divine dancer. She still performs on stage with Milonguisimo, which is where we met her first, the very first milonga (Glorias Argentinas) on the very first night of our very first trip to Buenos Aires.  And Susy is the very first milonguera that Man Yung ever danced with - which makes her Man Yung's first... Tango Love!

"Olé!!!!" exclaims Susy, imitating the motion of a matador swishing away a cape and narrowly missing a charging bull just in the nick of time - no, she will not marry Man Yung, despite repeated marriage proposals (Sorry, dear, better luck next time!)

Susy's life is filled with dancing, work, family, performing in Milonguisimo and in the theatre - it's hard to keep up with her energy!  With Susy's busy schedule and our own busy schedule, we thought it would be impossible to arrange another time at the milonga with Susy.  We talked on the phone several times, resigned to the fact that perhaps we will be able to meet only the next time we are in Buenos Aires.  But fate has a way of intervening...

"Oh my god, there's Susy!!!"  We had arrived during the last hour of Boedo Tango, and Susy spots us at the same time that we see her.  We didn't think we'd see her there - we had gone there to say hello to Haydee Ester Malagrino, Oscar Hector's sister, who had telephoned us to let us know that she'd be there.  Imagine our surprise and joy at seeing Susy!  She didn't expect to be at Boedo Tango either, but Oscar Hector had called her there at the last minute that night for a rehearsal for Milonguisimo.  Susy was dancing when we arrived, but once the tango was finished we rushed on the dance floor and hugged and kissed like crazy people.

Only a few minutes left and the night will be over - Susy danced a tanda of vals with Man Yung.  If you can distill joy and put it in dance, this will be it:


Oh my god, Man Yung, stop it already with those enganches on unsuspecting milongueras! (said Irene)

We are also happy Oscar Hector is unstoppable - despite the sad closure of Glorias Argentinas, here he is again, as determined and as dynamic as ever in his new milongas(!) - Boedo on Thursday and Friday nights, and Salon Rodriguez on Sunday nights.  We understand that he will be opening yet another milonga with Clely on another night - my goodness! 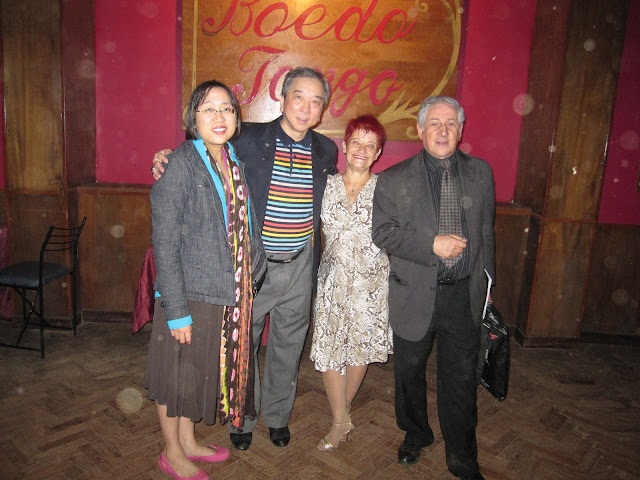 Susy Tilbe, Oscar Hector and the two of us at Boedo Tango.  How come when we get people to take photos of us, they always manage to cut off someone's feet or toes?  And look, they cut off the top of the Boedo Tango sign too!
All the best to Oscar Hector, the mighty force in the promotion of Tango! We wish you every success in your milongas and in your wonderful show Milonguisimo. And we know you'll be reading this, Susy - Susy, we love you! (And Man Yung proposes marriage, "Te Quiero Mucho!", even if the answer is still no!)
Posted by Irene and Man Yung at 11:08 PM