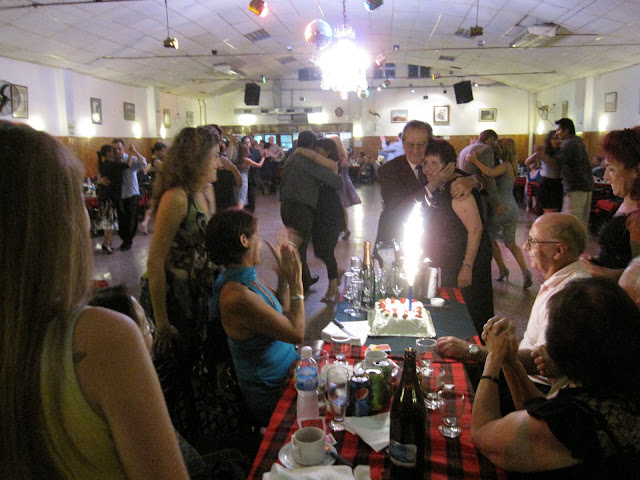 We celebrate Manolo's 79th birthday at La Baldosa.  It was time for friends, tango, and of course, flaming, exploding birthday cake!
Last week, I received a lovely email from Martha and Manolo, wishing me an extremely Happy Birthday with lots of hugs and kisses - all in UPPERCASE in giant purple letters.

It was very sweet - except it wasn't my birthday! "Luckily," I replied, "My birthday isn't going to be for another five months - so I have a chance to be young for a little while longer!"

I was just joking.  But if I think about the way I was brought up, I am extremely lucky I did not become a complete mental case when it came to birthdays.

Growing up, I had a vague idea that birthdays were supposed to be positive things - but the way my mother approached it, they were a cause of dread not only for her but for our entire family.  All through her late thirties and right up until she turned fifty, my mother would sport even blacker moods than usual when her "Special Day" was near.  Just breathing in her presence would annoy her - we walked on eggshells.  My mother's unhappiness made us nervous and jumpy, just waiting...waiting until she exploded, glaring and screeching with irrational fury at the slightest little thing.

What was it that made birthdays so unbearable for my mother?  She had three wonderful kids who never gave her any trouble (even though she claims disapprovingly that we are "sunken investments" - I have no idea what that means) and all of us made it through university.  My father was - and still is a devoted, loyal, loving husband - who listens and follows to whatever she dictates. My father and mother both had amazing jobs.   The house was fully paid for even before my parents turned forty - and they never needed to finance their cars.  And lastly, my mother looked, and still looks, great - she is still skinnier, taller, better proportioned than me, with the kind of frame that makes all clothes look spectacular on her.

Family, friends and acquaintances always envied my mother's perfect life.  But I have awful memories of her birthdays - including one in which she locked herself into her bedroom and my father told us to try not to make any noise - "Your mother has a headache", he said, fearfully.

Thankfully, my mother seems a lot better now than she was before.  Unfortunately, we are not the kind of family that talks about these things, so I will never know what was bothering her so much before.*  Was she worried about aging, losing her youth and beauty?  She had a husband who didn't care a jot and would love her anyway no matter what.  Was she disheartened that the years were passing and that she had not accomplished anything remarkable?  Raising three children in a completely new country far from home and being mortgage-free, is tremendous enough by itself.  Was she disappointed at the gifts that she got - that they weren't diamond rings or cruises or luxury leather goods?  OK, so we got her boxes of chocolate or pairs of socks with the pocket money we scraped together - it wasn't much to look at, but it was from the heart.

I giggled when I received that email from Martha and Manolo - I had to correct them, that it was actually Man Yung's birthday and not mine - but it didn't matter. We both appreciated their good wishes.  It was nice to know that they were thinking about us - we think of them and all our friends in Buenos Aires often too. We exchange emails, send messages on Facebook and call them every few weeks - just to see how they are, and they are overjoyed to hear from us too.

With great friends (and teachers) like Martha and Manolo and a wonderful husband like Man Yung, every day is a day I look forward to - living, loving, dancing, laughing.  Every day is "Happy Birthday".  I don't think you could beat that.

* I could only speculate that it was something like a mid-life crisis/depression thing going on.  Now that I am around the same age that my mother was when she was acting like that around her birthday, I am happy to say that I have no fear of turning into the same kind of monster that she became - probably thanks to Tango!  While her material life was as good as it gets, perhaps my mother needed some spiritual and emotional nourishment that she wasn't getting enough of.  My mother has taken up Tai-Chi in recent years, and it could be that this is helping her cope.

Email ThisBlogThis!Share to TwitterShare to FacebookShare to Pinterest
Labels: Irene and Man Yung dancing (DO NOT LOOK), Martha and Manolo, Tango Secrets