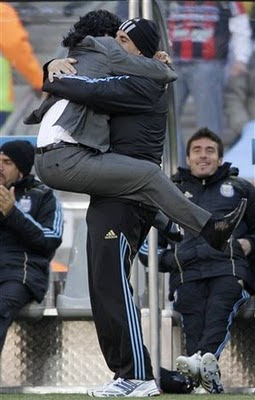 I love you, man
We were coasting east on the Gardiner Expressway a few minutes before midnight on Wednesday when we started to talk about football.

Man Yung has been watching almost every single game of the FIFA World Cup so far. Now, I would never subject myself to this agony - ahem, I mean pleasure - but I have been checking the results on the web every hour or so and skimming through The Toronto Star's reporting on the games now and then. Just so I won't be completely ignorant when the topic comes up.

"Hey, The Toronto Star says that the World Cup is kind of boring this year," I said. "What do they mean by that? They mention something about there not being enough goals, but what do you think? You seem to be quite entertained."

Man Yung donned his 'soccer Ph.D.' cap and patiently explained, "Irene, for most people, the soccer matches are less exciting when there are less goals scored. So in this respect, the World Cup this year is not as interesting."

But, just to confuse me, Man Yung continued. "In addition, the way that soccer is being played this year makes the games less romantic than they used to be."

Romantic? Did I hear wrong? The thought of sweaty, grunty, he-men in cleats charging up and down a muddy field trying to break each other's legs with flying tackles didn't strike me as being particularly 'romantic'. But then, what do I know about romance? The most romantic present I had ever received was from a BFF who gave me a long cardboard box for my birthday... filled with twenty packets of chicken flavoured instant noodles (well, I thought it was groovy).

So what does "FIFA World Cup romance" exactly entail?

"Just look at the match between Brazil and North Korea. Brazil is one of the most romantic teams ever to step foot on the field, and they create the most romantic moments - like that jaw-dropping, physics-defying goal by Maicon after a totally frustrating first half up against the Iron Curtain-like defense by North Korea:

Brazil vs. Korea DPR 2010: In this video, see Maicon goal at 0:22
Man Yung continued. "By contrast, North Korea is the anti-thesis of romance. The team is just a MACHINE. No individuality, no personality - either in the team or the players. They employed an extreme defense formation until Brazil scored the first goal, and then a cog in the machine turned and they changed tactics - they would lose the match for certain if they continued defending- and started employing some offense. The players are just replaceable parts of the central government ordained soccer match-winning factory. The trouble with this year's World Cup is that more teams are playing like North Korea, and fewer teams are playing like Brazil."

"For romance in soccer, just like romance in real life, you need individual human beings who act like individuals, with all their idiosyncrasies, their flaws - and their moments of inspiration and utter brilliance. You have to have players who dare to play with passion, who take big risks for opportunities that may not come to fruition. You have to have heroes and underdogs defying overwhelming odds - personalities people can identify with and aspire to. Unfortunately the trend this year seems to be for teams and players to play safe, to be obedient and disciplined, and to focus on not making mistakes in order to comply with conservative 'winning formulas'. Winning is a big part of World Cup, but it shouldn't be everything. Players shouldn't sacrifice everything to win."

Picture this: An odd-ball assortment of players, from ancient experienced veterans to bright new talents, led by an over-the-hill soccer star who, as some say, "Is definitely a better player than a coach". The coach is a one-man circus (you don't know whether to cringe or to laugh at some of his outbursts!), hired because no one else could pull the team together. It seemed that he couldn't either, and the team struggled to qualify - but made it at the last moment on a fervent desperate prayer. As for "game plan", alas, there's no real "strategy" to speak of - but coach gives plenty of encouragement, soccer-momish, by kissing all the players before they head into the field. And after the game, while the other teams head, hermit-like, into their respective austere dens - this team goes out to party! 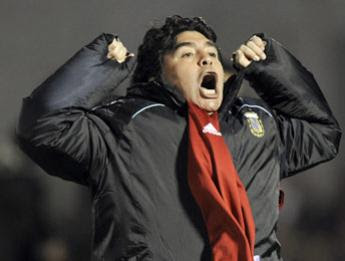 Diego Maradona - Argentina coach
If romance is in the story and the individuals and not the formula, Argentina - the country in which lives and breathes "Tango", the greatest three-minute romance ever invented - must have one of the most romantic squads in the World Cup this year. If they win - or come close to winning, it would be one of the most thrilling stories of World Cup ever told. 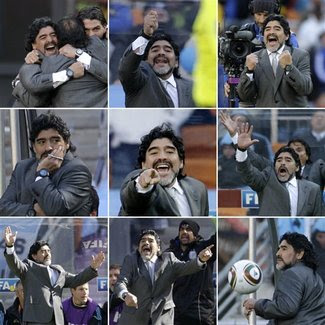 I hope they do win - if only to get Maradona to fulfill his promise of running naked through the streets of Buenos Aires! If that's not romance, I don't know what is.*

For more reading on this topic, please see Tangocommuter's take on Football and Tango here.

* I had written most of this when we got the news this morning - Portugal won 7-0 against North Korea! Now, Portugal's game is another example of romantic - but devastating - playing.
Posted by Irene and Man Yung at 8:29 PM