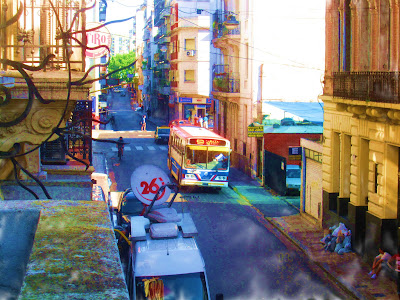 We are getting into the "Dance until the wee hours and sleep during the day" mode. After the excitement of "Tete" Tuesday, we slept until 10:30 a.m., had the hotel breakfast, went back to bed and woke up at 1:30 p.m. to go to the festival. We got there before the Canyengue class started and while Gabriela and Elias were still teaching their milonga traspie. Manolo looked at his watch and said that we were late, we answered "No, in fact we are early!" And he thought that was funny because that confirmed we are such slackers - we really never wanted to take the Milonga traspie class and preferred to sleep in!

I don´t think I have really talked about the classes. Well, we are taking only Canyengue and Milonga with Martha and Manolo, and since Osvaldo is too ill to return to the festival, Adrian and Roxina are teaching the last class as an extra Canyengue class as a substitute. Does Man Yung take it easy in class? You bet not. He is always on the go, practicing all the steps in class like there was no tomorrow. He claims that he is "taking it easy this year!" I don’t have the energy to keep up. I am glad to have Ms X. there to help me out with him – she can partner up with him while I try and sneak off into a corner and hide to take a break - but she can´t dance too much because she has bad ankles. By the way Ms. X is taking both the M&M and the R&A Canyengue classes and she is doing really well, Man Yung is looking forward to dancing Canyengue with her when she returns to Toronto.

The movie section today had videos of Osvaldo and Coca’s exhibitions. We really miss them. One of the main reasons we are in Bs As this year is because we really wanted to learn more from them, but it is impossible at this time. Osvaldo is still in the hospital, we heard that he needs an operation. We had hoped that he would get better in time to be released from the hospìtal on his birthday, which will be Monday. Anyway, we are all praying for him and hoping that he will get better soon.

We didn´t take the last class, we wanted to rest a bit before heading out to the festival milonga at Dandi. But instead of taking a nice long nap Man Yung watched soccer and I hand-washed clothes. It is a nightmare trying to get the washed clothes to dry in this humidity, it takes several days. We are starting to give up and using the hotel laundry service, at least for the big items of clothing.

Wednesday´s festival milonga was at Dandi, this tango hotel-classes-milonga full-service setup. It was quite a trip from Santa Fe and Callao to San Telmo, where Dandi is located. Our taxi driver smoked all the way, but instead of giving him a hard time, I talked to him about the smoking ban in Buenos Aires. He’s hurting, he can’t smoke wherever he wants anymore like they did in the old days. If he wasn't driving he'd be crying on my shoulder talking about this. He told us that the only places you can smoke are in the casinos and some of the bars. I remember you telling me about the crazy smoke-filled milongas the year that you went – well, the milongas are now smoke-free!

At last we arrived at Dandi – just seconds before Martha and Manolo! The dance floor at Dandi is very small and bisected by two big pillars. All the spaces on the side have chairs and tables crammed into every inch of space. There are lots of "Tango!" décor which I’m guessing is aiming for “authentic” but comes across (in my opinion) as “kitschy” and “touristy” instead. There’s even a fold-down stage on which graduated students of the "dandi tango program" can perform in their own tailor-made tango production. Dandi must make a lot of money because they can afford to put very attractive, very glossy, professional-grade advertisements in magazines. I read one at one point and it promised a shuttle from the airport, champagne welcome with live music, fresh fruit baskets and tango tv on demand in your room, in-house classes and milongas, escort and guided tours to the milongas outside, in-house bbq and shuttle to the airport when you leave. You can experience Buenos Aires and tango without taking a single step in Buenos Aires proper! Dandi is another place that caters, big-time, to tourists.

At the milonga, we saw the requisite “San Telmo Tango Show” teacher-performer (sharp suit and slicked back hair – except this one was a little long in the tooth) doing the whirling dervish giros and the requisite Nuevo guy teacher with the baggy pants and untucked shirt looking after the students and doing the high kickin’, boleo whippin’ and rhythmic boppin’ with the ladies. Someone has been doing their marketing work - people who are attracted by the idea of Dandi will gravitate to either of the two styles! The level of dancing was very very low - lots of people trying to do show tango and nuevo moves, but who can’t navigate for the life of them.

The festival people were all seated together at the back of the dance floor next to the bar and washroom, very squishy. Guess who came? Graciela Gonzales came to see Martha perform - they are "friends of the soul", as Martha describes it. Elias and Gabriela performed first, their famous milonga traspie and Chacarera. Elias was exhibiting a lot of "fancy" fast footwork. Martha and Manolo did really great milonga and milonga fantasia. After M&M performed, everyone went to congratulate them. Graciela was very moved and there were tears in her eyes. Man Yung saw that and gave her a hug and wiped her tears for her! By the way, Graciela has been such a big name in tango for so long, we were expecting someone as old as Martha, but in person, she is very young and pretty.

Man Yung danced a lot with some people from the festival, our european friends... and Graciela Gonzales! Graciela actually asked Man Yung to dance (well, she was sitting at the table with us and M&M and Man Yung paid for everyone´s drinks, but also because Martha explained that we were her friends and Manolo made Man Yung the keeper of his keys and wallet while he was dancing – that, my friend, means that Man Yung is FAMILY). They danced a tanda of later DÁrienzo. Manolo got very angry at Man Yung though - because when he was dancing, the pocket of his jacket flipped out and Manolo said that was very very ugly! It´s funny, on this trip, Manolo isn´t very concerned about Man Yung´s tango progress anymore, doesn´t correct him at all and thinks it is very amusing how inventive Man Yung is with steps. But he is always very strict on correct attire. The last time he got so mad was when Man Yung forgot to button his jacket!

Man Yung also danced with Adrian´s girlfriend who was an amazing dancer. She really followed beautifully everything Man Yung did and dancing with her was like dancing with honey. Apparently I whizz around too fast and I am too light, I should emulate this honey thing. Now I´m jealous!

We didn´t leave the milonga until it ended at 3! And we had a curious adventure when we were travelling back to the hotel. The taxi driver knew all about M&M and the Canyengue thing at Dandi. We had a long conversation about tango music, how to dance it, and how all the best dancers are from the south of Bs As - they are more inventive. The taxi driver was very authorative, and said he also taught tango. He had a lot of opinions about how people should learn to dance. I asked him for a card but he didn´t have one, he told me his name I think but I didn´t catch it and I couldn´t understand everything he said - but afterwards, I think he is Osvaldo Centeno, who is a milonguero who drives a taxi. I will have to ask Alberto to see if he knows him.
Posted by Irene and Man Yung at 9:15 AM