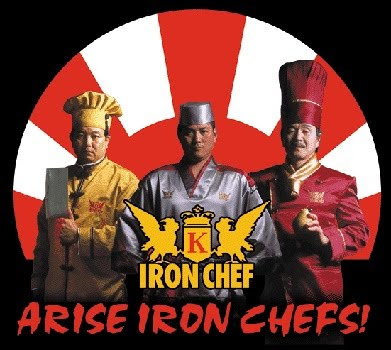 Before "Tango", Man Yung's favourite hobby was "Eating Chinese Food". In fact, despite becoming quite a "Tango Fiend", Man Yung never really gave up on his former hobby - only now he has to fit in his eating in between bouts of "Tango".

While indulging in his hobby, Man Yung quite naturally got to know many top Chinese Chefs - both here and in Hong Kong - and became quite friendly with some of them. When I first started dating Man Yung, I was always quite in awe whenever he took me out to eat - the head chef would actually stop what he was doing, come out of the kitchen and not only greet Man Yung but 1) Cook special dishes for him that were not on the menu and 2) sit at our table talking to Man Yung for hours and hours and hours until I was tired and grouchy and no longer in awe. Once we sat in a restaurant for more than SEVEN HOURS from early evening until the wee hours of the morning while a whole procession of chefs (from the restaurant we were eating at as well as ones from other restaurants who were dropping in to have a late dinner or late-night snack) took turns sitting at our table to talk to Man Yung.

Yes, it got to be incredibly boring. But I digress.

So, one time Man Yung was sitting with one particularly reknowned Toronto "Iron Chef" in one of his "sit, eat and talk" marathons, chatting about the usual things that one talks about when talking to a chinese chef - i.e. the secret techniques involved in the making sweet crystal sugar swallow's nest soup* or golden crispy deep-fried garlic oysters, what it was like learning the chef's trade in the vast kitchens of the top Hong Kong restaurants, the most memorable baccarat hand the chef ever had at Casinorama etc., etc.

The course of the conversation drifted to one of the Iron Chef's favourite topics - which was himself. At that time, everyone in the Toronto chinese restaurant industry knew about the "Top Ten Famous Chinese Chefs" of Toronto - and Man Yung's friend was considered one of them. Although making it on the list was some sort of honour, it also brought a goodly amount of bitterness and resentment. The art of cooking, being a highly subjective thing, meant that barring an official competition between the said chefs before an impartial jury (unlikely, impractical - and you'd be entirely naive to believe in the objectivity of such an experiment) - it would be impossible to determine who was first, or third, or seventh, and so on.

It was a thorn in the side of our Iron Chef friend, whose insecurities made him aching to be recognized as "The Best" (or, at the very least, Dear God, Top Five!). So at every opportunity, he would unload his resentment by launching into a long-winded tirade about how badly all his rivals cooked, and how well he cooked.

"Mr. A! Ha! He couldn't tell the difference between a squab and a chicken. And have you tasted Mr. B's "Supreme seafood shark's fin soup"? He is obviously putting strong chemicals like "pang-sa" to tenderize the shark's fin, it comes out as completely unpalatable mush! As for Mr. C, well, the hygienic standards in his kitchen are horrendous. It is rumoured that he doesn't even wash his hands after going to the bathroom! Last week I just served my special recipe "Shatin roasted pigeon" to the guests of the annual embassy banquet - I got unanimous praise from all the guests for the sweet, balanced succulence of my birds. They've promised me that they would stop at nothing to get me to cook for their next important banquet!"*

Man Yung, being ever the wet blanket (and knowing that Mr. A, B and C were really not as bad as the Iron Chef described), decided to rain on this particular parade.

"Iron Chef," said Man Yung, trying his best to be delicate, "I'm sorry to interrupt you - but as you know the old chinese Maxim: There is a sky beyond the sky, and man beyond man."**

Iron Chef stopped talking to Man Yung for years after that, very hurt that Man Yung was not in the least bit supportive in his efforts to promote himself as being "The Best" (or at least "One of the very Best in Toronto"). In fact, the last time we heard, Iron Chef has moved to a small village in south-western Ontario - where he can be "the Best" (and presumably the ONLY) Chinese Chef within a 200 km radius.


*Expensive, produced through animal cruelty and not even particularly tasty - unless eating bird spit is your type of thing.

** Unfortunately, what the Iron Chef didn't know was that Irene couldn't stand his cooking. Iron Chef's dishes, especially the ones he made "special" for Irene and Man Yung, had all the virtues of being expertly prepared, delicately seasoned, elegantly presented - and widely acknowledged to be the pinnacle of deliciousness by the general populace. Unfortunately, to Irene, they were also blander than blancmange.

*** Which is something that crops up very often in the Martial Arts and Chivalry movies and novels - the idea that no matter how good you think you are, there's always someone greater than you, and no matter how big you think you are in a particular situation, there's always a bigger situation in which your significance is reduced to nothingness. Famed martial artists have walked away from martial arts competitions that they have trained for since birth upon experiencing this epiphany.
Posted by Irene and Man Yung at 12:30 AM