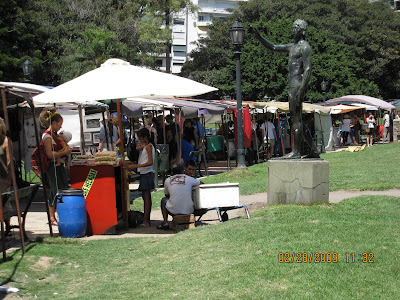 Finally! A day that was not so horrendously hectic! After staying up until 5 am last night sending emails to Toronto about all our adventures, I actually got to sleep in - until 11:30 a.m. today (What's that, a whole 5 1/2 hours of sleep?) Immediately after I woke up I tried to call M., a tango friend from Toronto who was in Buenos Aires at the same time. Didn't get her - got her landlady instead, who told me that M. was still asleep.

The morning sun was brilliant and warm, the skies were clear, the streets were not congested with cars spewing black smoke, and everyone was smiling and enjoying the weather. A beautiful morning. We went for lunch at Babieca, a restaurant close by the hotel that takes pride in its pasta and baked goods. Soccer was playing on the overhead tvs, and not many people were in the restaurant having lunch yet. Why the rush anyway? We parked ourselves on a table next to the window overlooking Riobamba.

We had lunch on numerous occasions in this restaurant last year. Babieca's pastas are rich and we never tired of our favourites which always came covered with mouth-watering sauces, gooey toasted cheese and savoury bits of ham, bacon, chicken, sausage or ground beef. This time, we ordered a tortilla espanol (egg, sausages and potato cake) and a linguini parisienne (cheese and ham with a cream sauce). We recognized the waiter serving us from last year! I told the waiter that we were at that restaurant just one year ago and that he had served us then. I only understood about half of what he said in our conversation, sometimes it's not the words, but the good will that counts, so we established a great rapport. But what really impressed the waiter was when Man Yung told me to tell him that he was "muy guapo" (very handsome)!

Now, one of our Toronto tango friends went into ecstatic convulsions throughout her first trip to Buenos Aires because every Argentinian man was incredibly handsome to her. But when we went in 2007, we were shocked that we weren't able to find even a single Argentinian man who could put us into convulsive ecstasies. They must have had all gone abroad to teach Tango! But seriously, this waiter was not bad, he actually strongly reminded us of Madonna's ex boy-toy Tony Ward ("And not like a disheveled unshaven Fabio in a ratty t-shirt and cargo pants!" exclaimed Man Yung). Our waiter thoroughly enjoyed the fact that we considered him as handsome (or even more handsome than) a bona fide Italian model and we got extra special service that day (Flattery! It works!)

After a leisurely lunch we strolled back to the hotel and tried calling M. again. Still asleep! I told her landlady (jokingly) that M. must be somewhat "perezosa" (lazy) and the little old lady agreed rather apologetically. What do the Argentinians really think of us crazy tango tourists, staying out all night and sleeping well past noon?

If we had been able to contact M., we would have gone to Confiteria Ideal (one of her favourite venues) with her - alas, that was not to be. Off we went to the Museo de Bellas Artes instead.

The Museum of Art is one of those grand buildings in Buenos Aires on that stretch of land reserved for monumental public works along the Av. Libertador along the river. All around are wide avenues, clear lines of sight and "inspiring" and forceful architecture - like those vistas you find in De Chirico paintings, or in the grand building projects of politically repressive regimes. However, the scene was also uniquely Buenos Aires by the profuse tropical foliage all around - palm trees and big low bulbous trees heavy with glossy dark leaves and fleshy purple-pink flowers (no, I don't remember what these trees are called). Quite pretty really.

Except that the building itself was sadly decrepit. Up close, we could see whole sections of plaster on the exterior wall peeling. Inside, the entrance hall was under serious renovation and no-one had bothered to hide it. Debris and exposed work was everywhere. There was selective air-conditioning - some rooms would be normal and others stifling hot. Oddly enough it was the rooms with the "old" art that were hot. Don't old artworks melt if they didn't have climate control? The wonderful Modigliani looked like it was sweating. Perhaps lack of funding meant that nothing could be done.

The second floor was devoted to Argentine Art - at least that part of the museum had air conditioning. The art was depressing - full of poverty, repression and nightmarish images like chickens with human faces and forks sticking out of their backs.

Plaza Francia was next door to the Museum of Art, so we spent some time walking around in the fair. The weather had become hot and humid mid-afternoon, so even though the stalls were interesting - filled with colourful and cute arts and crafts that we were just dying to buy as souvenirs for the folks back home - we found it to be unbearably hot under the canvas tents. Some vendor was selling a head massager consisting of a thing made of wire that looked like a long-legged spider, and since I was half hallucinating with the heat, I was wondering - "Would massaging my head with wire make me feel cooler"?

Sitting at Freddo's outdoor patio next to the fair, I felt much much better. There was a slight breeze and a nice broad shade under the big umbrellas. Man Yung's coffee came with a glass of gassy mineral water and a tiny scoop of cappucino ice cream. I was drinking a chocolate banana smoothy and I still got a scoop of cappucino ice cream! In fact, the waitress was going around with a huge tray filled with tiny dishes with tiny scoops of cappucino ice cream and passing them out willy nilly to the people lounging in the patio. There were tables of darkly tanned but wrinkly rich ladies with their designer handbags, groups of fresh-faced young people chatting and laughing, and families with noisy children enjoying their Sunday afternoon. Cappucino ice cream (and if you are really hot, a head freezing chocolate banana smoothy) was the perfect way to cool down after a very sticky and sweaty walk around the fair.

Surprisingly, the hotel was only a half hour walk from Plaza Francia - I was expecting that it would take longer being at least eight blocks. We passed by a Christian Dior store - really pricey and upscale in Canada and possibly only available at the swanky Holt Renfrew but here in Buenos Aires, it's just like "Strada". Man Yung was at it with the clothes again - three more polo shirts! Seems like a lot but you can bet he'll sweat through them in three hours of dancing (ewww).

We called M. again when we were back at the hotel. This time she was out. Our phone was flashing so it was possible that she had called back to leave a message, but for the life of me I couldn't figure out how to retrieve messages on the hotel phone. The hotel computer was occupied again! And typing emails with a stylus on my HTC phone with a virtual keyboard the size of ladybird was just stupidly eye-crossing and time-consuming. I was having such severe tech issues on this trip...

We had plans to meet with Alberto and Paulina on Sunday night for the milonga at El Beso. We were filled with wonder that they aren't completely sick of us already!
Posted by Irene and Man Yung at 12:01 AM