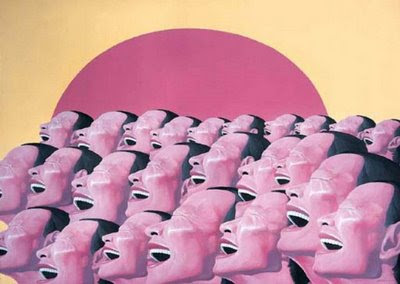 Both Man Yung and I are feeling so sick and so doped up on antibiotics, cough syrup and advil right now, it's the perfect time to hallucinate and reminisce about all the "fun" that Man Yung used to have when he traveled to The People's Republic of China on business right in the middle of the Cultural Revolution.

Man Yung admits the first time was a pretty shocking experience. From the colourful cacophony and chaos that is Hong Kong, he was confronted by a world of monotonous grey, navy and brown. Everyone he met was dressed in the same standard unisex uniform. No matter if you were locals or visitors, if your pants were too long or your haircut unconventional, the ubiquitous "Red Guards" would cut off the offending length of hair or pants for you in public right in the middle of the street, and then surround you and chant communist slogans so that you can be indoctrinated with the right kind of thinking.

All movies were supposed to follow the "Eight basic plots" (anything else would be frivolous or immoral) - and not deviate from this.

All cultural and artistic works were permitted to be dedicated to the praise and glorification of "the Worker, the Farmer and the Soldier" and nothing else.

Of course, people were not only expected to look and act the same, they were also expected speak in the same way and to think the same glorious thoughts about the eternal Maoist revolution.

Even Man Yung thought that all that conformity was a pretty good idea at the time (and sometimes he still does). The comrades were very organized. The uniforms they wore were so comfortable and practical (lots of pockets) - it sure beat having to think about what to wear in the morning. Everyone was working towards the same worthy ideals! Utopia. 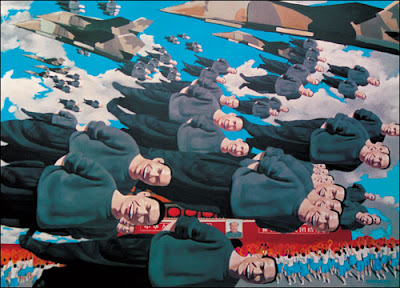 I can see how conformity can be seductive. Having certainty and being fully convinced that you are right 100% of the time must be nice.

Am I wrong to be a bit wary? Maybe I don't buy into all this lovely "conformity" (like I don't buy into religious fundamentalism, everyone having an ipod or every newly-minted tango professional dancing in exactly the same way in every new Youtube video since 2007) only because I am a little wrong in the head. 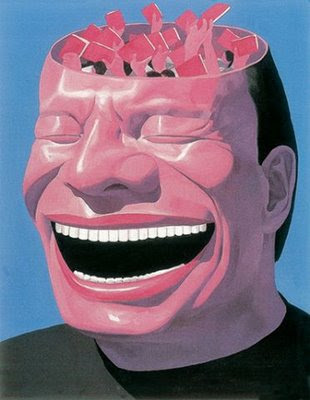 What I may need is a big crowd of very self-assured people around me chanting phrases from "the little red book" of the rules of the tango salon campeonato that they are waving ardently in the air. Then perhaps I can join in and enjoy the macabre hilarity of the radiant, conformist tango future. 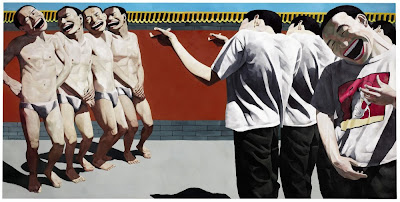 * All paintings by the contemporary chinese artist Yue Minjun.
Posted by Irene and Man Yung at 9:45 PM