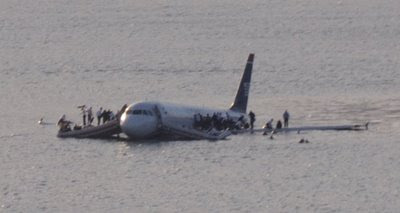 This may be old news to some, but every time Man Yung and I have seen news on the emergency Hudson River landing of US Airways Flight 1549 over the past few weeks, we have been simply amazed. We are amazed at the calm, courageous handling of the situation by the crew and especially the Captain Chesley Sullenberger, the orderly evacuation and rescue operation, and the fact that no lives were lost despite the perilous landing. We are further amazed at the humility and grace of Captain Sullenberger throughout the media frenzy that ensued. Captain Sullenberger, the crew of Flight 1549 and all the participants of the rescue effort justly deserved all the accolades and awards they subsequently received.

While we are on this topic - patrons of Toronto milongas are also often prone to bird strikes. I'm sure that many leaders have experienced the same thing. You're drifting peacefully with a partner on the dance floor to a lovely Di Sarli melody, minding your own business - only to be rudely awakened by a head-on collision with flocks of crazed wild geese unable to alter their "pre-set migratory patterns" (also known in the tango world as "figures"*).

So, when confronted with a "bird strike" on the dance floor, is Man Yung able to exhibit the same steady, calming grace of Captain Sullenberger and his crew?

Unfortunately, Man Yung has much to learn from the behavior of Captain Sullenberger and his crew. Instead of trying to land safely on the Hudson River, Man Yung goes into full retaliatory mode. He has even been observed trying to duplicate that famous scene in the 2000 blockbuster martial arts action movie "Romeo Must Die" with Aaliyah and Jet Li - by using the follower (usually me) as an impromptu melee weapon. 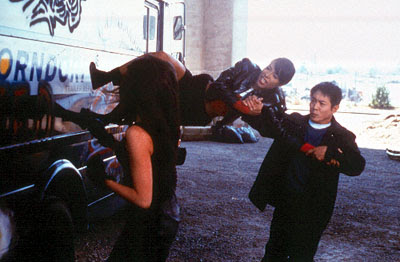 "I'm going to use my partner to kick YOUR ass!"
Take it easy Man (Yung)! How about trying to land the plane instead of trying to nuke the gaggle of geese?

* Why is it that so many leaders have to moronically complete the "figure" they are engaged in, no matter how dire the lack of space and the crowded conditions? We're not even talking about complicated figures - it could actually be the same two steps repeated over and over again. If it is clear that step number two will lead you to elbow the adjacent couple in the neck - just DON'T DO IT! As for those "I don't do figures, I just walk" people - don't think that you are any exception. You may be mesmerized by your own "elegant" and "musical" walking, but if the only way you are going to complete your elegant "step" is to push some body else out of the way - well, forget about your fantasies of the Campeonato Mundial. What you are is just another bird strike waiting to happen.
Posted by Irene and Man Yung at 3:55 PM

I like your observation... explains a lot about the glazed looks and the consistently non-musical dancing in Toronto - it's the attack of the Tango Trance zombies!